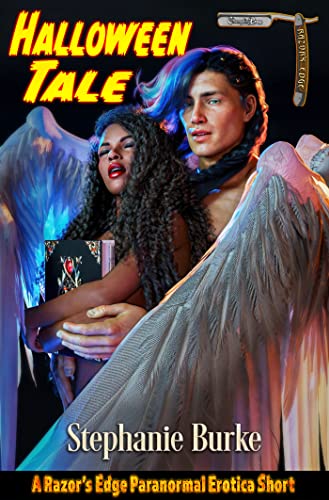 The dark was an oppressive, living thing. It pulled from me everything that I was, forced me to face the demons I thought no longer existed. It chilled my soul.

If it were not for the tattered ends of the book I carried -- my salvation -- I knew I would have curled up and wasted away in the cold, unforgiving dark. But because I could feel the power, the strength, the innate rightness in the thing I held, I trudged on.

On hands and knees, I crawled. With one arm braced against the rough stones of what I prayed was the right path, the other clutching the book to my mostly bare breasts, I inched along, only my senses leading me.

My muscles burned with the effort to hold me somewhat upright. My hearing strained as I moved, hoping they would not find me again. They wanted what I had. They wanted to possess me, to own me, to rip away my freedom, my soul, and my reason. They wanted me as they had left all the others who dared attempt what I was doing -- mad, gibbering, and insane. It was not a fate I would accept. I would not be like the others, the lost and confused, terrified husks of what they used to be. That was not my fate.

So I crawled, holding in my whimpers of agony, praying to whoever was listening that I would make it through this with mind and soul intact.

Something was running down my face -- tears, blood, something worse -- I didn't know. But it was there, and the fact that I could feel it told me one thing: it was warming up. I had been numb for so long, so cold, so frozen, and then suddenly I could feel.

Warmth. It enveloped me; it caressed my stinging face, turning away the burn of so many scratches and scrapes. It caressed my arms, flooded my veins and surrounded me with light; the light that is all good and welcoming. I shivering from the force of holding myself upright, straining with the effort of holding the book closer to me.

And then I heard someone speak.

My name rolled off his tongue, his voice a foreign, exotic thing that made my flesh tingle and my spirit yearn for what used to be so many days before.

"You don't have to be afraid," he whispered. I felt the words surround me, the brush of his warm flesh like the gentle movement of wings as soft as down as he slid in behind me.