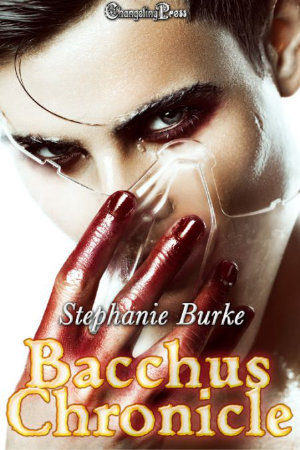 Blakemore is many things to many people -- a songbird with an amazing voice, a vampire childe, the only one of his kind, and the darling in the eyes of his ex-deity Creator... A slave who is now free and seeking revenge on those who abused him.

Mentally fractured and bordering on insane, the childe who crosses three god pantheons, Blakemore will stop at nothing until he sees those who enslaved him laid low, but at what cost?

Reality and insanity blend as he draws closer to those who orchestrated his downfall, but will destiny decide his path or will Blakemore find the courage to stand up to fate and decide his own future?

Excerpt
"You may fool everyone else, but it is damn near impossible to fool yourself."

Blake stared in his mirror, stared at that lying face, that cute face, that face that everyone just loved to see -- and he wanted to smash it.

Pain blossomed in his fisted hand before he even realized what he had done.

Suddenly, his perfect smile was tinted red with the thin, pale blood that dripped down the intricate patterns of cracks that appeared in his mirror.

Now there were a hundred little grinning faces, all his, and all terrifying for the maniacal laughter that rolled from those perfect lips.

Blake looked down, looked down at the tingling pain he felt in his right hand and saw the myriad of small shards of glass embedded in his skin. There were fine cuts that didn't bleed, and deeper cuts that ran red like water from a faucet.

He looked up again and he grinned wider as he saw more of the broken shards reflecting the light and every color of the rainbow. Crystal shards of glass lay like pretty, broken dreams.

So he sat there, shaking at the realization that he couldn't escape this life, that he would be caged here forever.

"Blake! Blake? Are you listening to me, boy?"

And there was the keeper of his cell, the holder of the keys --

"Blake! Answer me! Don't make me break down this door!"

Swiping the broken glass away with his injured hand, Blake rose to his feet and took a deep breath. He counted to ten backward, and by the time he reached one, the despair that was steadily growing in his eyes had receded. It was fully hidden by the time he finished walking across the floor, and when he swung the door open, all negative emotions were seemingly gone. His face was a blank slate.

"Yes, Franziko?" he asked calmly, smiling despite the red droplets that softly dropped to the floor.

"What is keeping you? You know you have to perform, and I don't want to hear any of your bullshit." He looked down and pursed his lips as his eyes followed a droplet of blood until it splashed onto his shoes. "And what the fuck happened to your hand?"

The short, balding man changed gears as he watched the crimson trails drip from his star's hand to the floor, his voice becoming less demanding and more vindictive. "This had better not be any of that suicide bullshit, demon. I own you, and nothing you do will release you from my grasp."

Quick as a striking snake, Franziko's hand shot out and gripped a handful of Blake's flowing black hair, knocking the small peacock feather in his hair free to flutter to the ground. With a snarl on his lips, he jerked the taller man down to his eye level. Blake grinned.

"You had better fucking get your shit together, demon. I don't give a damn if you pass out from blood loss. Get your ass on that stage then go greet your customers for the night. You should be grateful I don't just exile your ass to another dimension."

All the while, Blake kept grinning.

He smiled even though he wanted to rip his owner's head off his body and piss on his brains. He smiled harder as he felt his powers flare up -- and then the spells warded in the binding to protect his possessor flooded his body with pain. The collar he wore tightened around his throat in warning, and soon he knew it would choke him unconscious if he didn't calm.

And all the while, Blake smiled. He smiled because if he did anything less, he would burst into tears.

"Fucking waste of space," Franziko hissed, shoving Blake back, ignoring the stumbling, the blood, and the maniacal grin -- ignoring everything but that Blake was only a piece of ass and that later he was going to put it to good use. "You have five minutes." Then, noticing the broken mirror behind him, the man grunted. "And clean that shit up. I have standards to maintain, and I will not have them compromised by the likes of you."

Franziko turned, straightening a jacket that would have better fit a much trimmer man, and stalked away, muttering some truly nasty things.

Blake closed the door and shut out the world for a few more minutes before he had to take up the reins of his life again.

Walking over to the mirror, he snapped his fingers, and instantly the glass was gone; the shards in his hand jerked free and flew to the shattered mirror, slotting themselves into place as it reassembled itself.

Blake looked down at his hand, noting the worst of the wounds had already healed the into thin pale scars that would soon disappear. "The show must go on," he intoned, forcing his voice into sounding happier, more upbeat, though he felt the pain of his captivity deep within his heart.

Then it was time to smear on some eyeliner and dress in whatever Franziko's handlers left out for him. Then Blakemore the Songbird was ready to take his place on the stage, wow the audience, and sell one more piece of his soul to the highest bidder.

"Shame on you, Blakemore," he whispered to himself as Franziko himself began to bang once again on his door. "Damn you for still being alive when your spirit is so dead." He swung the door open and presented a perfectly beautiful, perfectly calm face to his owner.

As always before he took to the stage, he cast his mind to a pair of rich hazel eyes and a full, perfect bottom lip. He was just glad she would never see him this way. He ignored the murmuring of the people in the audience -- he couldn't see them, anyway -- but he could definitely hear them laughing and talking.

Walking over to his microphone, he closed his eyes for a moment, snapping them open as the spotlight fell on his face, the collar compelling him to obey the orders of his owner. When the music from the piano in the back of the stage began to swell, he opened his mouth and let his anger and sadness pour from his soul.

Did a demon like him have a soul anymore?