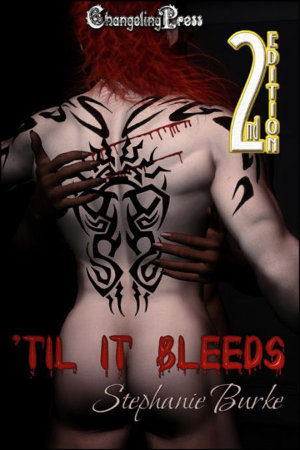 Darkness, demonic possession, the gates of hell threaten to open, and evil threatens to rise over the land… in Ohio.

The Hands of Fate, a pair of ancient relics with untold power, have gone missing, and it's up to a special pair of operatives to recover them.

The Guild has assigned their best bonded fighting unit, Faith and Vice, to recover the legendary Hands from a scheming under-investigator seduced by their dark power. But with summoned demons, power hungry humans, and maybe even the Guild itself standing in the way, the two men have an unrelenting fight on their hands. A fight to save an undeserving humanity from itself, protect the innocents they are sworn to save, and uncover the dangerous truths hidden deep within the hearts of the Guild, all while holding their own inner demons under tight rein -- demons driven by lust and blood hunger, and only satiated by each other.

To succeed, and to save the world, they may have to fight -- 'Til It Bleeds, and beyond.

Excerpt
"Why don't you just calm the fuck down?"

Faith was not amused. He sat back against the far wall, away from the carmine-colored… ick… that now liberally spattered the shiny hardwood floors and the once pale cream walls.

He crossed his legs and took a harder toke on the unfiltered cigarette that he had rolled up before coming to this devil's arsehole of a city. His black eyes held a slight tint of red, showing that he himself had calmed, even if his partner had not.

"You know," he said, "we still have to walk out of this shit-hole, and it's still broad daylight."

"But… but it makes such pretty colors, Faith." Vice spoke softly, his voice resonating with the child-like quality that showed he was not fully in his right mind. It was one of the reasons the Guild had almost declared him unmatchable and unsuitable to breathe the same good, fresh air as the rest of their engineered freaks.

He smiled up at Faith, his arms painted black nearly to his elbows with the spilled blood and other fluids of their victims. "They get darker and darker…" His pale eyes shone brightly with glee, his face painted in a gruesome caricature of war paint, the browns and reds of human blood drying and flaking as he turned to stare fully into his partner's face.

But as Faith took another toke and frowned at him, the unholy light that gave Vice such an eerie appearance began to fade from his eyes.

Rolling his eyes, Vice rose to his feet, his hands raking gore-stiffened strands of hair back from his face, exposing the dark brand that encircled his left eye. "You are no fucking fun."

"You just smeared that shit all over your damn hair," Faith reminded him, "and before you even think about getting fucked again, you had better wash that shit off. Vice, this shit ain't funny, man. And you weren't screaming I was no fun last night. In fact, it sounded more like, 'Oh, oh, more,' and, 'Don't stop'."

"Sex is not fun." Vice stared at the entrails and other freshly exposed organ bits that coated his arms and hands and curled his nose up in disgust. "Sex is serious business." He flung his hands outwards, barely missing Faith with a thick spray of gore. "This shit…" He curled his upper lip, exposing a gleaming white fang. "…this shit is the fun stuff."

"And you just fell off your fucking rocker." Faith rose to his feet, looking down at his full-length black trench coat, checking for blood spatter. "Our time is almost up. The clean-up crew will be here soon, and they don't take too kindly to getting their food pre-chewed for them."

"Fucking scavengers." Vice snarled again before stepping around the three bodies that littered the floor.

"Hey, they do a damn good job." Faith pinched out the red ember still glowing on the butt of his cigarette and pocketed it before reaching for another. "And for every job --"

"There's the perfect tool." Vice stripped off his bloody shirt and used it to wipe the worst of the spillage from his face and hair. He looked down at the stained shirt, then tossed it into the pile of organs that he'd harvested with his bare hands. "So what's next?"

"Home and a feeding frenzy," Faith dictated, rising to his full height and scanning the room one last time. "Who would ever think that a bunch of society ladies were trying to raise demons? They were the perfect fodder."

"Not just any old demons." Vice reached for his own black leather jacket and donned it over his bare chest. "Lust demons." He looked down at the grisly remains and kicked a head to the side. "Stupid cunts. Playing with shit they have no idea about, toying in shit that's better off left alone…"

"And they got us." Faith walked over to grip his partner by the forearm. "And now, if we have the incantations…"

"Have them." Vice patted his jacket pocket, the same jacket he'd removed prior to the slaughter to ensure that no blood fell on the spelled pages inside.

"And all signs of the ceremony have been wiped?"

"Oh, hell, yeah." Vice grinned as he took in the portion of the floor he himself had hacked up with his broadsword and fed into the fire, a fire that had been started by using two out of three of the unfortunate ladies' hair.

"Then our work here is done." Faith turned to face the door. "And you know, because you went overboard -- again -- you won't be going with me back to the safe-house."

"I know, I know," Vice chuckled. "The underground."

"You'll spank me." Vice smiled, licking his lips and tossing a wink at Faith's back.

"I saw that," came the droll reply. "And I'll not only spank you, I won't fuck you afterwards." Then, almost like a shadow, Faith seemed to dissolve into thin air, ghosting through the house and leaving not so much as the smell of his pungent cigarettes behind.

"Likely story," Vice laughed, and then he, too, ghosted through the house, leaving no trace of his passing.