Mischief Managed (Sympathy For the Devil 5)

Apollon, the stage name for the god of mischief Enk, only wants to get back to living his best life but with fans out to find him, insane people trying to kill him, and Kokopelli, an even more persistent god of mischief, stalking him, the pale god can’t catch a break.

Surviving is even harder for the god in hiding now the FBI are asking questions about the plane crash, social media is amazed that the whole band Abadon survived, and their would-be killers are getting closer.

In the middle of all of this Enk discovers, despite his ominous past, that even he can fall in love… which begs the question, can Mischief ever be managed? 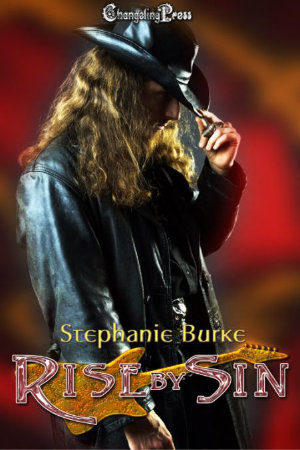 Excerpt
“So this is how we die,” Sin grumbled. “Not in a bomb attack, not in a fiery plane crash, or even attack Chihuahuas… we drown in a sea of reporters.”

Enk let out a chuckle as he stared at the hundreds of people staring back at them: screaming people, crying people, people carrying banners and holding signs and pushing against the human barrier of police and security that held them back.

He was about to say something clever about the dour nature of man when a figure tried to push through the lines, was actually allowed through, and came barreling towards them.

Sin suddenly dropped his Mr. Doubtful expression and pushed them aside to race toward the figure.

Orion gave one mighty leap and then he was in Sin’s arms, hitting him with such force that Sin toppled back onto the tarmac with his lover straddling his waist.

The kiss Orion bestowed on him was almost pornographic and the reporters were eating it up.

Enk looked back at their ragtag group and didn’t even bother to hold in a laugh. They were looking the worse for wear by design.

Dressed in tattered clothing and wrapped in metallic heating blankets, they all tried to convey a look of horror and relief instead of looking like they spent a week at a day spa. And it was hard because as plane crash survivors, they didn’t really have it all that bad.

They’d had basically a hot tub, a decent amount of chicken, fresh air, sunshine, the intervention of divinity… more divinity than they thought they should have, really. Their stay had been made more pleasant -- and uncomfortable -- because of having yet another god in their midst. One too many maybe.

Enk thought back to the tall, dark-haired, self-proclaimed Lord of the Mountain and struggled to hold in another laugh lest he not be thought of as eccentric but just a mean jackass. But the whole “Get the Fuck off My Mountain” thing was kind of cute. Like the god of mischief who proclaimed it.

The new god had finally showed up for all of them. When Nabu and Aika wandered back into camp after the obvious fuck-fest they’d shared, Enk finally got an explanation for the power zinging toward him that had almost made him useless on this trip. They were on the property of another god of mischief, and this trickster was named Kokopelli. As soon as they told the rest what was up, Kokopelli appeared and demanded they leave.

“I want you off my mountain,” Enk mocked, rolling his eyes at the unnecessary theatrics of the other god. No matter how hot he was, it was no excuse to be such an asshole.

“Oh, I’m sorry,” he’d replied before anyone else could get a word in. “I didn’t know this was protected territory when a bomb blew our plane out of the sky. So sorry to have inconvenienced you by surviving.”

The black-eyed god just glared at him with his waist-length hair that was bobbed attractively in the front to frame his face, and the amazingly hot breechcloth that exposed some of the most muscular legs and calves that he had ever seen… and the brown leather moccasins on large feet--and you know what they say about men with large feet--and all the silver jewelry in the form of several pairs of earrings and those bicep cuffs and…

Okay, so he found the guy hot, but he was still an amazing asshole.

Then he had no further time for contemplation because the press was rushing them and demanding answers to their shouted questions, with their security barely able to hold them back. Finally Sin got off the ground with Orion and they were hustled into the air-conditioned comfort of the airport offices where they were to be bombarded with new questions from the FAA, the ATF, and all sorts of federal investigators from alphabet groups, all of which made him want to go back up on that mountain with the grumpy god.

Once they were all separated Enk found it hard to hold in his ire as he glared at the agents who were asking him the same questions over and over again.

“No, I have no idea who wants to blow us up,” he snarled. “We only get a few dozen death threats a day… including that church and its insane followers, and the alt-right which is polite speak for Nazis. Did you go and question the Nazis, agents? I’m sure they may have a clue because they only threaten to kill us daily. Or how about some of those anti-gay groups that pop up like pimples on a teen? They are loads of fun and write the most intelligent correspondence like die fag, die.”

“Are you gay, Mr. Apollon?” one bespectacled agent asked, and the rest of the room groaned.

“You do know this is being recorded, right, Specs?” he responded, narrowing his eyes at the man as he sucked at his fangs. “That you can get into all sorts of trouble for asking me that when it has nothing to do with your investigation, right? Unless you are in on it. Are you in on it, Agent Glasses? Did you help plant the bomb on the plane ’cause you hate the fags?” His words were hissed in a soft tone, a dangerous tone that many in the room recognized. “Do you think maybe a difference in lifestyle is a reason to murder someone like Major Tom?”

The recording was turned off and the baby agent rapidly hustled outside of the room while the others all but fell to their knees and sucked his dick to get him to accept an apology.

“I think we’re done,” he finally snapped as he rose to his feet. “You have no reason to detain me as I’ve answered your questions several times over without the appearance of my attorneys… much to their dismay. I am sure The Seven will be interested in what happened in this room. And until as such time as they contact you, I don’t want to see any of you again.”

No one stopped him as he made his way out of the room.

Now he was waiting in a VIP lounge, watching the reporters cluster from the vantage point of one-way glass. Sometimes it paid to be rich and famous.

“So, I take it we’re here for a bit longer?” Charle asked as he moved beside the disgruntled man.

“California dreaming, living the life,” Enk muttered shooting Charle a look before turning to stare back out at the gathered group.

“Well, bright lights, street magic,” Nergal’s lover chuckled. “Oh, and an extra special added conference just for us. I find that I am okay standing in the background and playing little traumatized lover. There has to be over four dozen news vans out there and that’s not even getting into the roving reporters from social media. It’s a circus.”