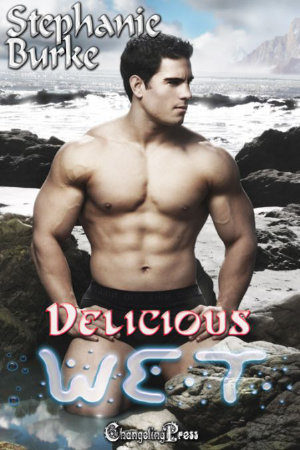 Kiva is from the land and Yillan is of the sea. They were never supposed to meet, but because of a near-fatal accident their two worlds collide. Once they discover each other, nothing short of death will keep them apart. But how can they be together when one cannot breathe water and the other cannot survive in air? Will they fight against the very fates themselves only to never discover how delicious true love can be?

Excerpt
Without Kiva's consent, his father had agreed to mate him with that sea-witch of a woman. And because his father had declared his intent, Kiva had been confronted with an ancient family law.

If the promised child refused the suit arranged by the head of the household, that child had less than three turnings of the planet to secure a different mate or pay a fee to the spurned suitor's family. This had to be done to the foiled family's satisfaction or the one chosen for him would stand.

It was desperation that now drove him to expand his own private Tokah, the only thing his grandfather had gifted him with upon his death. If he could build up his personal coffer, he could pay for his sister's remaining dower, put off the sea-witch's family and then travel to a different inlet where he would find a mate of his own choosing. It was a risk he felt was worth almost anything, even death.

These very thoughts were flowing through Kiva's mind when the stone of his Tokah shifted suddenly beneath his feet as he hefted another boulder. He lost his footing on the wet Tokah as a strong gust of wind tossed him high into the air before he landed in the swirls of pinks and blues that made up their Sea.

The pain of the boulder grazing his head was almost secondary to the pain that filled his lungs as he tried to breathe. The burn of the Salt Sea filled his nostrils and shocked his body into stillness. It stole consciousness from his mind as cold and wet surrounded him, weighing down his arms and legs. His eyes remained open, burning, as he tried to kick to the surface. But his legs refused to move as the pain in his head began to match the pain in his chest. Bubbles flowed from his nose, and he began to panic.

His nostrils were on fire and his limbs had turned into stone. The last thing he saw as his frantic thoughts began to still was the disappearing view of his Tokah.

As darkness covered him, he realized he had never been so cold, so alone. His dying thoughts circled back to the laughing, smiling face of his sister, the careworn frown of his father. They would be alone now. They would be forced inland to die without his aid, their reputation tarnished and his sister suffering for it in an unknown inlet.

Maybe a stinky, unkempt bride who would spend all his currency and kill him in his sleep with her stench was not all that bad, he reasoned as his heart began to slow and a deep stillness filled him.

"What is up there?" Yillan swam as close as she dared to the People's settlement.

People. The word was enough to make her kind start drooling. She rolled her eyes at the thought, but there was no mistaking the fact her kind was obsessed with People.

"I saw one swimming," her eldest sister had once told her, a twisted look of horror and disgust on her face. "It looked so odd, those skinny appendages flapping both ways as it tried to ride Mother Water. It made me laugh to see all those dangling bits just flopping around. Who ever heard of Kin with two flukes? It was odd, I tell you, Yillan. And it had the plainest-colored skin. There were no scales. And instead of fins, it had the wiggliest little things at the end of its two flukes. They were like fingers, you see, but smaller. It splashed around making the most unholy noises I had ever heard. Even injured Great-Fish don't make such noisy splashes when our hunters bring them down."

Then her sister got a crafty look in her black eyes. "I can see why Kin say they are good eating, Yillan. There is hardly anything protecting them, no scale, no fin, no fang... an easy catch. If they didn't look so much like Kin, I might have been tempted to snatch a bite and see for myself if the legends are true."

"Legends." Yillan snorted, making a few small bubbles rise up from her nostril-blowholes. "They seem to drive Kin crazy. As if we don't have enough craziness with the People dropping things on our heads. What is the purpose to tossing heavy boulders into the waters near the rock outcroppings they loved to create? Are they attempting to very slowly take over the sea by increasing the landmass? It would make more sense to build along the shoreline."

Just as she spoke her frustrations out loud to herself, a shadow loomed overhead.

She looked up just in time to nearly get smacked in the face by a large boulder, no doubt tossed by the stupid People. Then, as she recovered her bearings, she had to dodge again as something vaguely Kin-shaped, but with many more appendages and really soft skin, neatly landed on top of her.

"People," she gasped, before shrieking and swatting the thing off her. "Ewwww. I touched People."

Her active swatting caused the thing to grunt as it went spiraling away from her and closer toward the deeper-deep, the place where Kin resided.

She should have turned away and swum to a different part of Mother-Water to observe the People out of its natural habitat, but something made her turn back. Maybe it was the thought of that vulnerable creature dying -- for everyone knew People could not breathe underwater -- or maybe it was curiosity about a being who was so different from Kin. People seemed to have an intelligence of sorts, but no one had ever really studied them before in any real depth.

Maybe it was the dark red trail it left in the waters, somehow proving that it bled like Kin, which instilled some spark within her heart. Or it could have been her memories of the legends of her people. For it had been said the flesh of People was sweet and tangy and could grant one the ability to walk on land.

Now, not too many Kin would willingly leave Mother-Water to tread upon the dark, solid mass known as land, but there were a few scientists and adventurers who would give a fluke fin to try it out.

Also, if the legends were true, the governing body would want some human flesh to send out raiding parties. The hunters and the governing body would want to find out if the People were attempting to invade Mother-Water with their barriers made of stone, like some conspiracy theorists insisted. There had always been rumors of a secret government cave where humans were harvested and ingested so the scientists could gain knowledge of humans and use it in active warfare with other tribes of Kin from the far-far waters.

Either way, the poor pitiful creature who had just landed on her head would be discovered by Kin and would simply disappear as if it had never existed.

People were not thought to be worth the effort, but they did appear to have societies, and they reproduced, and they hunted the sea like Kin hunters... so that made them kind of sentient, right?

"Bother." She sighed before turning and streaking toward the People, intent on getting it to a place where it could breathe.