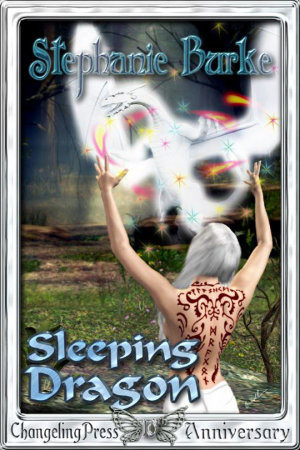 Youltan lives a life of obligation and service, a slave to the desires of others, harnessing the strange and powerful chaotic energies known as Ice Magic. After a final betrayal by the people he protects, he finds himself transported to the one being who holds the key to his freedom.

The wards tattooed across Garyn's back ensure his total compliance, trapping him in his own form of slavery, until one of the traitorous Mages, the kind that devised this tortuous penance, is placed in his prison. Now manipulating his way to freedom rules the sex-shifting dragon's mind.

Garyn never expects Youltan to willingly sacrifice so much for a person he barely knows. Nor does he expect to find the a core of passionate heat that exists deep within Youltan's soul. The fight for survival takes on new dimensions and strains the very threads of their honor and morality.

But what would you expect....when you prod a Sleeping Dragon?

Excerpt
Feet braced apart, arms extended to their maximum length, he stood and waited. There was nothing in his mind; his world was a blank slate, waiting to be filled, waiting for the agonizing pleasure… and the horrific pain.

Slowly, it began, drawing its energy from the very earth on which he stood. Pulsing writhing ropes of energy, of magic, of power, twined around themselves as they sought a rod, a bearer for their might.

Around his ankles they looped, slowly, like some starving creature seeking sustenance. And what they found seemed to please them, for they began to roll up the length of his body. Faster and faster they twined, their colors the brilliant blue that exists in the heart of every fire, the icy white of the coldest glacier, a sharp glaze of power blinding all who dared watch this spectacle.

Up around his knees they crept, gaining confidence and speed with every second. On and on, around his waist, over his chest, across his shoulders until his head jerked back as if snapped by some unknown entity.

Blood-red lips parted, a scream locked within a frozen throat, and a fall of silver white hair blew madly around his form in a wind created by power and magic. Bright lavender eyes snapped open to reveal luminescent sparks of pure white that illuminated those strange orbs, the eyes of an alien-one, and the eyes of the demented.

Then the power seemed to lash out at its conduit, raising him to his toes as wave after wave of pure energy penetrated his body, gained a purpose, grew in its strength.

His body arched, his arms flying above his head as the sheer strength of the thing that possessed him brought him to his toes, building and building until his whole person was one shining, glowing being that seemed almost too beautiful to view, yet too sinister and compelling to look away from.

Suddenly, a cry erupted from his throat, loud, agonized. The cry echoed over the land as the very earth began to quake beneath his feet.

His piercing scream startled the onlookers, the curious who had gathered to view this unusual feat, to watch what both heaven and hell had wrought and then left to travel this land that they called their own.

But they were too stunned to look away, transfixed.

As he continued to scream, cry after cry of ecstatic pain, the energy that converged on his body began to coagulate, to meld into one large beam of power.

Still screaming, he forced his arms toward the pulsing dome that surrounded the land, the thing that honor and history demanded he tend to, no matter the cost.

His sudden silence was almost as unnerving as his screams had been, as the world seemed to hold its breath in anticipation, as the tension built around the young man, as the very gods seemed to tremble in fear.

Then, as the tension built to a plateau, then nothing. Soon the people began to breathe easy, thinking the show was over, then one final high-pitched scream exploded from his mouth.

And with that cry, a monstrous beam of light and power leapt from his body. Blue, silver, white, it all mended and swirled as warring colors shot from his body, his eyes, his mouth, following its given path, striking the shields with an audible crash that almost sounded like the shrieking cry of pure crystal shattering.

His body gave way in the face of such a massive energy burst, but the power would not let his body fall. It supported him, swirled around him almost lovingly, then began to drain the very life force from his body.

Head tossed back to its farthest, hair whipping around that face, obscuring its near beauty from the frightened yet silent watchers, his body bowed and his knees bent as he fought to retain some of himself from the hungry energies that sought to leach his very essence from his body.

Trembling and panting, he whimpered once as the beam began to lose its brilliant illumination, then faded altogether, growing weaker and weaker as the conduit struggled to reclaim part of himself from the massive outpouring of power.

Then, suddenly, almost as if it had never been, the beam of light dispersed, exploded into a million glittering sparkles, before disappearing cleanly from sight.

With a groan, the conduit dropped to his knees, his body falling backwards as all the energy seemed to leave with the passing of the beam.

He knelt there, supple body bent backwards, breath struggling in his chest, as his strange, lavender eyes drifted shut.

Then, as he took his first full breath, the watchers were amazed to see a shadowy mist exhaled into the brilliant heat of the day, a breath that seemed as cold as the arctic islands they once harnessed to create that shield that protected them from the evils of the outside world.

Then his whole body began to spasm.