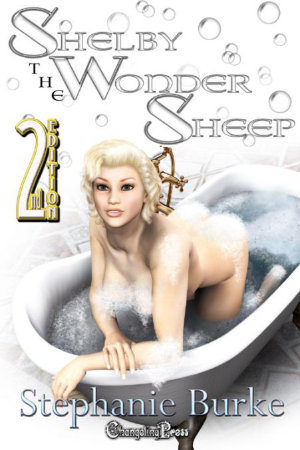 Shelby is a heroine like no other. Sure, her main power is shifting into a pony-sized sheep, but this descendant of Pan is no one to mess around with. She's determined to stop crime in its tracks and, with her sidekick boyfriend, the black, redheaded Scotsman Arthur, nothing will stand in her way.

William is not a bad man. He only wants what everyone wants -- peace and justice for his minions. He wants to live his life to its fullest, and if some people need to be taught a lesson, then they'll be better off for it in the long run. But even he had no idea that a chance meeting in West Virginia would wind up altering his heart and his life, leaving him to choose between his heart and his ideals.

Excerpt
"Bleat for me, baby." He snarled, his long hair creating a curtain of red that blocked her view of the room.

His hands in her hair, tugging and pulling, made her want to obey his orders. His powerful thrusts stole her every breath. His sweat covered her back, his hot, heavy balls banging into her clit with his every move.

His wooden crook slapped against the white flesh of her ass, driving her to buck harder, to scream louder, to give in to the passion making her pussy tingle and her head swim. "Baaa!" She opened her mouth and let the bleat roll from her throat like only she could.

His cock filled her so completely that the friction of his rapid thrusts almost burned. His teeth nibbled at her ear, his tongue licking the sting away. His muscular body covered hers, making her want to submit, making the world go away, awash in a red-hot glow of passion.

His parents stood horrified at the door to their bedroom. She saw them before he did, and with a panicked squeal -- more like a baah -- she hiccupped, he jerked out, nearly falling off the bed, there was a poof of smoke...

And the wool really began to fly.

"Arthur!" his mother wailed. "How could you? I got you out of the Highlands to keep you away from those... those mindless sheep!" The small, dark skinned, red haired woman screamed as she beat at her chest with both fists, tears running down from incredibly large brown eyes. "Oh, God," she wailed, her Scottish accent pronounced as she backed out of the room. "What will the girls at the flower club say? I was the only one who didn't have a boy addicted to... to... Oh, God! I can't bear to repeat it!"

She turned and fled, her screeching sobs filling the vacuum her abrupt departure created. Leaving behind the dad, who stood there, mouth hanging open in amazement, before he moved closer to his son.

He eyed the pale, quivering shanks that his son desperately tried to cover with his body as he walked around the bed, examining the situation from all angles before giving his son a queer grin.

"Nice piece of sheep, son." He chuckled, leering. "Your grandfather always had the same eye for a nice plump rump. He always said sheep were good pussy too."

And with that, the man exited, no doubt chasing after his scandalized wife.

"Why me?" Arthur sighed as he pulled at what had to be the mother of all wilted erections. "They're gone, Shelby. I guess it's safe to come back now, though I have no idea what my parents are going to say when they recover from the shock."

His answer was a pitiful bleat, for in her current form that was all Shelby could manage.

You see, Shelby had the distinct honor of being a superhero -- well, heroine, actually. She was a defender of peace, lover of her sidekick, Arthur the Herd Boy with his Crook of Justice and his Muscles of Might, and the only known were-sheep in North America.

Her large, black eyes stared at her lover as if trying to apologize, but he was shaking his head, mute acceptance in his eyes. It was all part of being the lover of a were-sheep; a nervous were-sheep who'd had no one to teach her to use her powers correctly.

As a result, whenever she got nervous or scared, or just plain had a case of the hiccups, she could transform into a huge, white, woolly sheep.

"I know." Arthur sighed, reaching over to run his fingers through her soft, fluffy wool. "I didn't expect them either."

Arthur the Herd Boy also had a power -- the ability to speak to any herd animal and actually understand when it responded. It wasn't a truly useful power, but it sometimes came in handy. Like right now, when he was trying to comfort his distraught girlfriend after this first disastrous meeting with his parents.

After a few seconds of petting and scritching, there was a soft poof, a flash of white, and Shelby's pale hide was once again made of soft human skin.

"Shh," he soothed. "We'll deal with it. They had to learn our secret sometime."

"That you are strange 'cause you date chunky white girls?"

"Darlin'," he drawled in his heavy accent. "In case you haven't noticed, I'm a black Scotsman with curly red hair. I don't think you can get stranger than that. And you are not chunky. You are perfection, my love. Enough curves to keep a man happy and coming back for more."

"No, darlin'." He chuckled. "I was thinking about the secret where you turn into a sheep and try to fight crime."