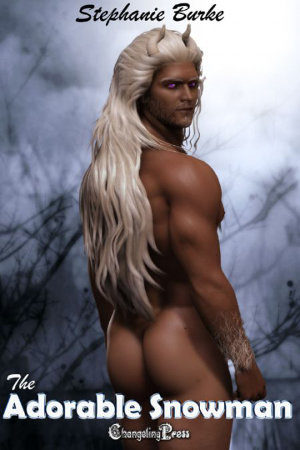 Serendipity Collins is minding her own business, driving along in West Virginia in the worst blizzard in years, when a strange creature appears out of nowhere and she runs him down.

Ta is on a mission to get away from the humans who captured him. He only wants to get back to the gate point to find a way home when he meets her -- the mate of his dreams. Now he only has to convince her they are perfect for each other... if they can survive the hunters who are after him and battle Serendipity's own private fears.

Ta is nothing but determined, Ren is nothing but stubborn, but before the storm comes to an end, maybe they will discover a way to make this fairy tale a reality and melt the ice that encases her heart.

Excerpt
"Holy shit." Serendipity squinted at the shadowy figure running toward her RV. Who in their right mind would be out in this weather? Goodness knows she wasn't anywhere close to right in the head. That was why she was somewhere near West Virginia, off Highway 85, trying to find a place to park. Any clearing would do at this point because the weather was becoming unpredictable, and visibility was nearly gone.

There were very few vehicles on the road, including salt trucks. And when the salt trucks stopped running you knew you were in deep shit.

But there was a figure, moving at a rapid clip, and coming straight for her -- and he wasn't stopping.

"Damn it," she hissed, slamming on her brakes as the person stopped right in front of her. "Fuck!"

Her tiny RV started fishtailing, the back end whirling out of control as the back tires tried to find traction on a solid sheet of ice and snow. Quickly, she jerked the wheel in the direction the RV was skidding and began to tap the brakes, her hands and arms locked onto the steering wheel.

The RV began to spin, and Serendipity let out a squeal as it made a complete circle before hitting something with a loud thump and then sliding to a stop. Never had she ever been more grateful for a total lack of traffic. She sat there for a moment, her heart racing, breathing like a bellows before she recalled the thump.

"Shit!" she gasped, unclipping her safety belt and swinging the driver's side door open.

An arctic blast of cold wind and hard snow hit her in the face and stole her breath. She looked around, the eerie pink/black color of the sky sending an ominous shiver up her spine, but she shook off the feeling of impending doom and stepped out into the storm.

It was like the wind was blowing sand instead of a snow/ice mix. Serendipity squinted as she looked over the road, her feet in their fuzzy blue boots slipping before finding purchase. She slid-walked over to where she thought she'd heard the thump and began to scan the area around her truck.

"Hello?" she called out, wrapping her arms around her body. The cold weather leached the heat from her skin. "Hello? Anybody? Are you hurt? Can you hear me?" The wind forced her words back at her like a slap, and she began to panic even more. Had she imagined everything? No. There was a man... she was sure of it.

Her body began to shake in reaction to the adrenaline building up in her system. Her eyes were watering. She prayed she had run over Bambi or something instead of a person.

"Hello?" She was about to give up her search and head back to the RV for a flashlight and her snowshoes when she heard a moan.

Spinning toward the moan almost landed her on her ass, but she managed to windmill her arms and plant her feet so she didn't land on her butt as she moved toward the sound.

There was a man lying in the snow.

She raced over, slipping and falling to her knees. Scrambling through the slushy buildup on the road, she came to a stop in front of a still form.

"Oh, God," she moaned, reaching out to touch a bare shoulder. The person was lying on their side, his or her face obscured by a long tangled fall of white, curly hair.

The shoulder quivered and the moan sounded again. Serendipity rolled him -- yes, that was a male face -- onto his back.

"Hey." She softened her voice as she brushed the wet hair from his face. "Hey," she repeated, and his eyes opened. "Whoa." She had never seen such pretty but strange eyes. They were gold, like a sunburst, and they were surrounded by a huge band of bright purple that almost matched the storm-torn sky.

"Whoa?" he repeated softly, blinking up at her before closing his eyes again.

"Sleep," he repeated, his whole body shifting in the cold snow, like it was the most comfortable mattress and blanket he owned.

"No." She shook his shoulder and his eyes opened again. "No sleep. Not out here."

It was about then that she noticed her victim was totally nude. Covered by his fall of hair, it appeared that this guy was well built, and only his long locks hid his naughty bits. But her eyes should not dip down because she was the one who hit him in the first place.

"Oh, shit," she gasped, amazed that he wasn't blue and dying, as exposed as he was. She had to get him back to her RV before he froze.

"Hey." She shook him again, hoping against hope he didn't have any internal injuries. "We have to go."

"Go," he repeated, but this time he didn't lie back down. This time his eyes stayed on her face for a good moment before he began to struggle to his feet.

"Yes, go." She nodded, reaching out to grip his arm in both of hers, trying to haul him to his feet. "We need to go."

After a cold moment that felt more like an eternity, Serendipity got him to his feet, and then she froze once more. Damn, he was tall.

Standing fully upright, he was about a foot taller than her five foot five. But she only had a moment to marvel because he began to stagger.

"Okay," she crooned, not knowing if she was trying to calm him or herself. "We got this. We can do this."