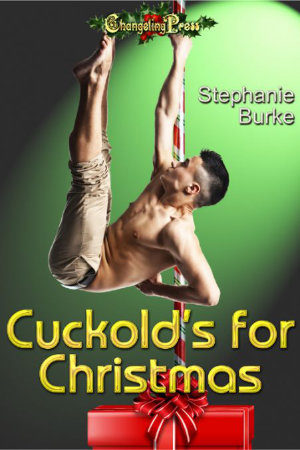 After having her heart broken by a cheating ex, wealthy and disabled divorcee Emma-Jean Lawson twists her misfortune into an empowering statement… by opening up an all-male strip club named Cuckold’s. Now all she has to do is find her star dancer.

Noel Winters has a big wet problem. The once Principal Dancer for the Paris Ballet has turned to teaching his beloved dance to others after a career ending injury, but now a busted water heater, just in time for Christmas, has him seeking other means of income to keep his business afloat. An ad from Cuckold’s catches his attention. It can’t be that hard being an exotic dancer, can it?

When Emma and Noel meet, there’s an instant attraction, but is sex alone enough to hold a relationship steady? And where did the guys with guns come from? Suddenly their happily ever after is looking grim, but with two of the most magical allies helping along the way, maybe they will pull it together in time to have a happy holiday after all.

Excerpt
Emma felt an orgasmic tension building deep inside her, making her toes curl in their sensible fur boots, making her breathing stutter, causing all the muscles in her body to tighten beyond her control as she spiraled higher and higher.

She was quite sure she was crying now, and having given up on being silent, she was also screaming and groaning her pleasure for all to hear. The sound echoed around them, his own deep moans and curses a perfect accompaniment to the animal sounds he was pulling from her throat. The sound of their combined voices, the sound of his wet flesh slapping into hers, the feel of his balls striking her ass on each upward thrust… God, how has she ever gotten so lucky!

She pulled at his grip on her hands and thrilled at the strength it took for him to hold her in place with one hand, managing her weight only God knew how, and attempting to fuck her through the wall behind her without any show of weakness. Okay, her strength kink was well and truly in place. He could break her so easily, yet instead he chose to hold onto her like she was the most fragile thing ever while he fucked her like she was paying for it by the hour.

Then he swirled his hips in a way that made all thought impossible. Her body took over, her nerves zinging as he released her hands. She wrapped them around his shoulders, her nails digging into his back as he read her signs and began to move faster.

“Noel!” She gasped as her body seized up and pleasure tore through her, making her slam the back of her head against the wall as a low groan rolled from her throat. Her orgasm made her internal muscles clench around him and lights began to dance behind her closed eyelids.

She squealed as Noel gripped her ass with both hands and began walking backwards until he all but tossed her on the chaise lounge, the only other piece of furniture in the still incomplete vault, somehow never pulling out.

“Okay?” he asked, his eyes wild, his hair standing on end as he sweated above her, his tight abs moving hypnotically in and out as he ran a hand over his chest, swiping away the sweat that gathered there before he bent over her, looming, blocking out the light until all she could see was him.

Emma ran her hands over his sides and down to his thighs. Her legs were still wrapped high and tight around his waist and the small thrusts he was making was keeping her arousal at its peak despite the dregs of her orgasm still making her feel heavy and light at the same time. He was looking desperate, his eyes narrowed, his pupils blown, his breathing erratic, like he was ready to explode.

“Come on, Noel,” she purred, raking her hands through his hair and pulling him down to bite at his lips. “Come on, baby. Fuck me. Come for me.”

“Fuuuck…” Noel drawled before he closed his eyes, his hands resting on either side of her head. He slammed his mouth onto hers, forcing his tongue inside of her mouth, savagely taking over their kiss as his lower body began to move. All grace lost, he slammed into her, thrilling her overly sensitive body, sliding her up the lounge until she was forced to toss one hand back to grip the back of it to prevent herself from sliding up too far. But damn, did it feel good.

Overworked nerve endings soared to life again and before she knew it, she was torn between spreading her legs and sliding them up higher to give him better access. The decision was taken out of her hands as he reared up and gripped her legs, pushing them up and back, and he turned into the world’s sexiest pile driver and began to work her but good.

“Emma… damn… Em…” He moaned her name like it was a curse and a blessing at the same time, but Emma could hardly pay attention. Her body was tightening up, her breathing ragged, her whole body throwing itself headlong into another hard release.

“Fuck, baby,” she screamed, and thinking became impossible as her body once more took over. It started tingling the tip of her nose, an electric tickle that traveled down her spine and made her thighs begin to shake. It grew more powerful the faster he moved, the friction between them building up until her muscles, already tired, began to tighten in an almost painfully delicious way.

Propriety was tossed aside so she could beg and plead for more. Noel was happy to give it to her, looking beautiful, like a fallen angel, as he arched his back, threw his head back, and roared his release to the world.

He dropped one hand to her pussy, his thumb rubbing rapidly at her clit and within seconds the fire within her exploded, sending her body dancing underneath his as her release tore another scream from her throat.

She collapsed, a heavy heap of quivering flesh and vibrating bone, with the touch of his hands running over her body grounding her and gently pulling her back into reality.

She was spun again as he readjusted, damn -- his strength was still getting to her, until he was lying on his back with her cradled against his chest, running his hands over her damp skin.

If it wasn’t for being locked in a nearly unfurnished safe room and having guys with guns circling her office, this would feel like a Christmas paradise.