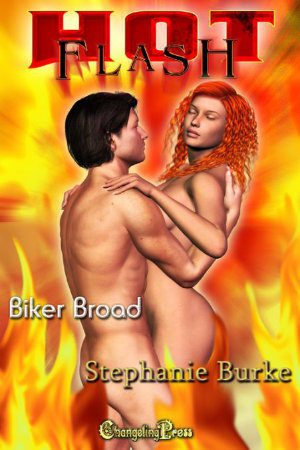 He was watching as she approached, a red-hot woman in cool black leather. She was more than he ever dreamed he could handle, but when she made her demands known, he had no choice but to capitulate to this exotic, mysterious, and all too delicious biker broad.

Excerpt
It was too hot on the beach. In fact, it was so hot he hated to move from his shaded spot to do anything. The only good thing about having a spot on the beach was the fact that nobody could intrude on your privacy. Damn, it was too hot!

That's when he saw her. At first he thought that she was some figment of his imagination, a heat-induced mirage in leather, but after blinking several times, he decided he wasn't seeing things, and she was definitely real.

Long, dark auburn hair, the color of autumn sunsets, hung low on her back, the ends just striking her bottom. She lifted the flaming mass away from her neck and closed her eyes as a warm breeze caressed the damp skin there.

As she turned, he realized that the pants she was wearing were actually a pair of tasseled brown leather chaps. He felt a tightening in his groin as he noticed the rough edge of the tight leg gear ended a few inches below a pair of ass-cupping blue denim cutoffs. She bent forward, and his mouth went dry as two slivers of pale flesh played peek-a-boo with his attentive eyes. His day was starting to look up.

His breath caught when she again turned and presented him with her near perfect profile as she pulled her jacket from her body. She sighed and arched her back, showing off two well-rounded full breasts with... perky nipples? Yes, she wasn't wearing a bra beneath her tiny white tank top, and the sweat from her body plastered the thin cotton to her like a second skin.

Tossing the jacket aside, she slowly lifted one hand -- a hand with long, dangerous blood red nails -- and absently brushed the glistening skin of her concave stomach. Her hands went to the ties of the thick leather waistband that held up the chaps.

With the ease of a stripper, she loosed the small ties and sighed loudly as they gave up their grip on her narrow waist. A small, red band of skin was exposed as the waistband fell away, reminiscent of the small, red welt that a smartly applied belt would leave on the soft tender flesh of a bottom. His fantasies began to take flight.

He watched, her own personal voyeur, while she bent low from the waist to unfasten the silver buckles on her brown boots -- bright, shiny buckles. The thumb ring on her finger glinted in the sun, drawing his attention to her long, slim fingers. She had piano player fingers. Fingers that would know how to wrap around a man, know how to stroke just right, how to tease... But his attention was again drawn by the way she delicately balanced on one foot and kicked her boot off.

She was like a living flesh-colored flamingo, graceful and prideful as she removed first one boot, then the other. She wore a thick pair of white socks that bunched around her ankles, making her legs seem all the more shapely and delicate.

He sat forward in his chair, a captive audience of one, his hands gripping the armrests so tightly that his nails bit into the wood.

She threw her hands above her head, rising up on her toes to do so, and became a small goddess, reaching for the sun.

She lowered her arms and, in a slow, lazy manner, eased the leathers from her body.

Sheer perfection. She was the stuff of dark fantasies, boyhood nocturnal emissions, and the lies spun in locker rooms. Her legs were long and sleek, delicately muscled, and did she ever fill out those minuscule shorts.

Flipping her hair over her shoulder, she again bent low to ease her socks from her small, delicate feet.

He leaned forward in his chair and again was rewarded, but this time by the sight of those shorts rising up to the crack of her ass, proving that she wore nothing underneath and that he was a blessed man. Would she bend farther, perhaps rewarding his diligence with a glimpse of her hidden secrets? But instead, her eyes widened like a doe caught in headlights. A startling shade of green, they glittered, her eyebrows drawing together as her gaze centered on him.

So there he was, caught with an erection the size of a small tree tenting out the material of his pants, and all he could do was stare back. He wasn't embarrassed. Hell, the size of his hard-on was impressive. He just wished that she had removed a bit more before discovering him sitting there, enjoying the show. Should he pull out his wallet and offer her a dollar and an inviting grin? Should he apologize for observing her in such a state of... undress?