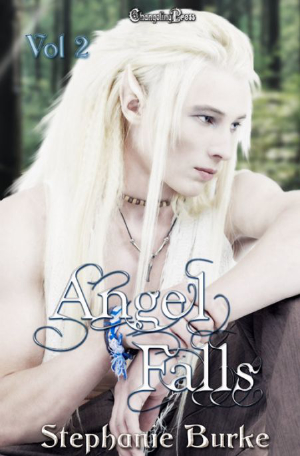 My Protector: Being sheriff of a small town has lots of perks. Richard knows just about everyone by name, he gets free coffee at the café, and he gets to spend as much time as he wants with Amber Graves, the woman he desires above all others. Unfortunately he finds himself firmly friend-zoned, much to his and his shadow-wolf’s dismay.

When strange phone calls bring up memories of a dark past that rocks Amber’s soul, Richard knows he needs to protect her -- even if he’d not so sure he can protect himself.

Rare as a Unicorn: Warrior Jova was once a unicorn, masterful and proud… Now he’s stranded in Angel Falls. People here are strange, and none more strange and desirable than the pair who rescues him one snowy morning.

Baylin and Torin, Angel Falls’ veterinarians, have a lot going for them -- talent, exciting careers, the love of each other, and a strong relationship… but they’re not complete. They need a third to commit to being with them. The attraction is immediate, but how can they make this work?

Publisher’s Note: Angel Falls Vol. 2 contains the previously published novellas My Protector (Parts 1 and 2) and Rare as a Unicorn.

Excerpt
Excerpt from My Protector

Richard watched as the angry, determined Amber Graves kind of sank in on herself. He hadn't meant to blurt out his problems to her, but the tear in his soul was beginning to bleed all kinds of emotional pain and he was getting tired, so damn tired.

"It's not your fault." He sighed, reaching up and gripping her hands in frustration. "None of this is your fault."

"I never -- I... Jesus, Richard. I don't have issues; I have subscriptions and enough of those to sell at news stands."

"You don't have to make things up, Amber." He snorted. "But I just wanted you to know how I really felt. And by your actions, I think I can guess where you stand." The smile he offered to her was rueful and filled with the pain that was now slowly beginning to consume him, but it was the best he could do.

He was soul sick and hurting, his wolf had turned against him, and now he was beginning to think maybe it was right. Maybe he should have immediately taken the direct approach with her, told her how he felt from the beginning. He flirted with her because he flirted with everyone he knew. It was just part of his nature to be open and friendly. But maybe he should have told her it wasn't just social niceties with her, that he was deathly serious when it came to her.

Her words stopped him cold. He turned to look at her, to really look at her and froze. Her hands were fisted at her sides, her body trembling.

"You don't have to tell me anything you don't want to." He stepped closer, reaching out to cup her shoulders in his hands. "I understand --"

"He beat me, Richard. My ex, Todd Ritter, he beat me so badly sometimes I wanted to die."

Richard froze as anger rolled over him in waves. "He beat you --"

"I met Todd when I was just a scared little girl playing at being an adult." She smiled sadly and took a step back, taking a seat on the rock once more. "He was beautiful and kind and knew just how to look for women with low self esteem. He was really good at that, reading a crowd and reading people. He knew just what to do and what to say."

Richard stepped closer to the boulder, closer to her.

"He separated me from my family, and I let him. He was white, you see, and they didn't think much of that to begin with. They thought I was going to college and getting above myself. And he read that about them and used it to drive a wedge between my mom, my sister, and me. When he had me where he wanted me, with my family all but disowning me, he asked me to marry him." She looked up at him and he saw something of the younger girl she had been. "I lapped it all up, every word he said. So I got married and I got pregnant and then I got the bright idea to help us out by dropping out of school to save money and taking small accounting jobs to bring in extra cash."

She tilted her head as if lost in memories, before she blinked twice and turned her head to look at him.

"Those were some of the happiest memories I've ever had, Richard. He treated me like his queen. Then his parents died so we moved out of town to the house they left him. I didn't even tell my family where I was going or give them my new last name so they could track me down. They didn't support me so I wanted nothing to do with them. I didn't know it was because they could see what kind of man Todd really was."

"He betrayed your trust."

"He betrayed more than that." She laughed, her wild tangle of curls bobbing around her face as a sharp wind blew through the trees, carrying the bitter sound away from them. "The first time he hit me he apologized and I forgave him. He had graduated but there weren't many jobs for an actor in Maryland. His parents had died and left some bills that had to be paid off, so money was tight. He started working at a bar at night and was waiting tables during the day and... and I figured he snapped a little. I forgave him and he promised to never do it again. But he did and this time he told me it was my fault. I didn't have the house clean. I was six months pregnant and..." She shook her head before lying back on the rock. She looked like a cute kitty basking in the sun.

"He hit me and I believed it was my fault. I wasn't keeping the house clean and I needed to take more accounting jobs to help. Then he was drunk because his customers kept buying him drinks, and he took them because I was never there to talk to him like I used to do. And then it was because I was too busy for him. And after Lila was born, he stopped making excuses. He just wanted to hit. Everything in his life was out of control, and keeping me in control with his fists and his words made him feel more like a man."

"Amber, I would never raise a hand to you in anger."

"I know." She rubbed her arms. "It was all him and only him. You just don't have that in you. And by the time I realized I was in some very real trouble, Lila was almost one and he wasn't even making up excuses. Believe it or not, that's what got me out. He had me hemmed up in the living room when Lila began to cry. He was going for her and I realized that if I stayed there, he would he hitting her next. So I picked up my prized possession, my die cast metal figurine of the Planet Quest, and I bashed him over the head."

She said it so matter of factly that Richard just gaped at her.

"Then I tied him up, went to the bank and took all the money out of the account. It was a joint account, and I put most of it in there, so I had a right. Then I went to the police station and reported the assault. I also told them that I tied him up so I could get away with my daughter. I told them that I feared for my life and while they were taking photos of my face and body, I contacted a social worker and got an emergency placement. He was picked up and brought in. I identified him and got a restraining order. I jumped from homeless shelter to homeless shelter until I could swing a legal separation. After a year of hard living with Lila, he didn't show up for the divorce proceedings so it went through uncontested with special circumstances. I found my way here when Lila was about two and a half and was doing part-time work at Chloe's Diner. She let me keep Lila in a back station and the other waitress spoiled her rotten. Chloe was a wonderful old lady, was great at manning the cafe, but was horrible at books. So I started helping her out and saved her a lot of money when I found some major mistakes her bookkeeper was making. She admired that and said my talents were wasted on tables and put me in the office. When she found out I was staying in a homeless shelter and why I hadn't finished my degree, she gave me the apartment over the shop and insisted I finish my degree online. It was all brand new back then, and so exciting..."

She threw her hands over her head and arched her back, stretching a little, and Richard felt his mouth go dry.

"When she was ready for retirement, she let me buy the shop and I changed it into the Planet Quest Cafe."

"So... so you're not too fond of men..." Richard knew he couldn't compete with ghosts from the past.

"Oh, God, man, I love men." Amber laughed. He looked up to see amusement shining in her eyes. "I'm not a man-hating bitch, Richard. That's not why I ran."