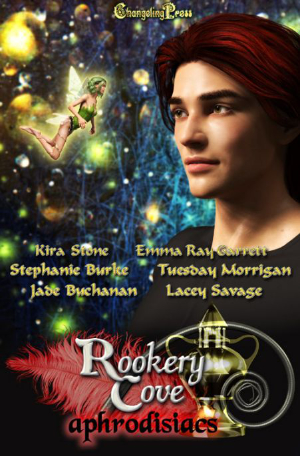 Rookery Cove Aphrodisiacs: Here to satisfy the intimate needs of every paranormal.

Kira Stone -- Breakwater: A bird and a fish may fall in love, but where will they build a home?
Emma Ray Garrett -- The Keythong’s Blaze: Can Branimir and Viktor prove to Okibi that they’re interested in an equal relationship?
Stephanie Burke -- The Darkness: Manx finds his soul’s ease in Mayleen, but will the Darkness bring madness or refuge?
Kira Stone -- Monster Mash: When an entire batch of Mash is ruined, only one act will pacify the Dark Elf’s ire.
Jade Buchanan -- Faun of a Time: Some secrets are meant to be uncovered.
Lacey Savage -- Pixie’s Prisoner: Nathan vowed to never again be experimented upon. Not even in delicious, erotic ways… well, maybe.
Tuesday Morrigan -- Kidnapping Karisma: Watch Kitty go wild with four very hungry men willing to appease her every wicked desire.
Kira Stone -- Satisfaction Guaranteed: Curiosity about a seemingly defective tube of lube compels Thomas to call Rookery Cove Aphrodisiacs’…

Rookery Cove Aphrodisiacs guarantees pleasure from all our paranormal products -- one way or another.

Excerpt
"I don't believe this," May whimpered as she felt the heat of a human body standing behind her. Something hard pressed against her temple.

"Don't move," the man hissed, his hand wrapping around her face, ensuring that the slightest sound would not pass her lips. "You do what I say, no one gets hurt. You understand?"

He was so close she could feel his body heat, so close that the kikkou ropes that bound her body began to chafe uncomfortably.

Mayleen nodded shakily, her eyes wide in the dark corridor as she struggled to do what the man wanted. Damn, this was exciting.

"Good. Now I won't be here long, and if you are a good little girl, nothing will happen to you."

Good little girl? she thought. You don't know how good I can be… then silently smacked herself for thinking about stupid chauvinistic comments and the overwhelming excitement of being taken hostage when her life could be in jeopardy.

"Good, now open this door." He eased his hand away a bit, cautiously, ready to slam it back on her face if she made any loud noises.

"But I just closed it," she whispered back, in shock that something like this could happen to her on her contract night.

"Open it!" He gave her a little shake and again May nodded.

May felt the keys she still held in her hand cut into her palm as she squeezed them in growing alarm.

Oh, my God, she thought. I am going to get dragged into this room and raped wearing these damn ropes under my dress. This is going to make me late and Master will pitch a fit if I'm late and that will be that. No submissive contracts for me.

"Your breath stinks," she growled, then mentally slapped herself. What the hell was she thinking? This… this… this maniac was going to kill her. Maybe if she did what he wanted, she could call the cops, call the master, and still make it in time for the ceremony.

She opened her mouth to agree and felt that hard thing press harder against her temple, then decided that absence of voice was the greater part of valor and snapped her lips shut tight.

Suddenly she got the key in the door and the lock disengaged.

Quickly, she twisted the knob and the door flew open, tumbling her into her office.

"Where is your computer? This is an office -- there has got to be a computer," the man snarled, shoving May across the room while staying as close to her as possible. "I don't have time to play with you." He gave her a shake to emphasize his words.

Good, May thought, struggling to stay on her feet. Because you definitely would be my last choice in playmates.

But like a good little hostage, she pointed him toward her computer terminal, all the while fidgeting purposefully to make the knots between her legs tease her just a bit. Why let the adrenaline rush go to waste?

The man stalked over, dragging May, and whipped out the chair. She stifled a scream.

"What the hell is this?" He paled, looking down at the molded leather penis that stood erect, almost saluting him, from the chair seat.

"Um, a Good Time Happy Seat?" May offered, holding in a snicker as the man tightened his hold on her neck. "It's connected with the computer and when a woman… or a man --" she added, looking slyly at him.

"What the fuck is this shit?" he asked, squinting to make out a variety of sex toys and lubes that lay scattered across the desk.

"Just shut up," the man snapped, releasing May to knock the proud leather erection out of its seat. "I need to get this shit sent."

"Um, I'll be… over there…?" May tried to step away from the madman, but he suddenly turned toward her again.

"And just where do you think you're going?" he snarled, reaching out and grabbing her by the biceps. "I have a little job for you."

Mayleen gulped at the look in his eyes. This did not bode well for her.