With A Whie (Roosters 4) 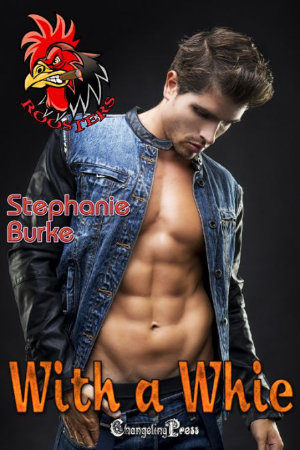 Evan Whie has a big brain, a big company and an even bigger issue... in his pants. Being that big can be a problem when it comes to dating... but he's not interested in dating just anybody. He wants his queen.

Cleopatra Cockie has a big problem when it comes to love, and an even bigger solution to fix her woes... Seduce her business partner and man of her dreams, no matter what the rumor mill has to say.

They're two gamer geeks on a mission and if they can work it out, Cockie will always be connected to a Whie.

Excerpt
Evan Whie had a huge problem... right between his legs. He looked down at his crotch and winced, not only at the horrible bunching in his crotch area, but at the feel of having a good solid ten and a half inches of cock shoved into an area that was not designed to hold all that mass. Maybe he should have gone for the kilt?

"You have to come out of there sometime," a nasally voice called, and Evan knew it had been the biggest fucking mistake of his life to bring along his best friend on this particular shopping trip.

"I'm not coming out and you can't make me," he shouted back, going up on one leg to try to pull down at the crotch. There had to be some more room in there... somewhere.

"Look, you big baby, either the pants don't fit or they do. If they don't I have a few more pairs of slacks for you to try."

"Who says slacks anymore?" Evan grimaced in the mirror and gave up. The pants had to go.

"I do, you fashion disaster. And I want you to try the pleated front pants next. You'd be less prone to meat explosion that way."

"What? You know it's true. Those cute granddaddy little slacks you like so much don't have enough give in the crotch. That's why you need pleats. Reinforcements."

"At least you have the legs for that. Working off sexual tension in the weight room is good for a few things."

"And if you just tell the woman how you feel --"

"No, you won't. You'd get an anger boner and pass out before you could reach me. That much blood suddenly rushing down has that effect on people."

"Lydia Summerwell, you are the worst," he grumbled as he tried to pull himself together. He was an adult. He was a business owner, a successful business owner at that. He could handle this.

"The absolute worst." He really did hate his best friend sometimes.

Evan forced himself to stare into the mirror again and examined the reflection there.

He was a reasonably good-looking man, nothing to make him one of People's "Sexiest Men on Earth," but his looks wouldn't curdle milk either. And he had nice eyes. It was like Mother Nature couldn't decide if they should be green or blue so she threw them both in there in equal amounts and let the colors fight it out.

He was in decent shape for a glorified computer jock. A Boffin was what she called him. And he had to admit that Lydia was right in that working off sexual frustration with weights was a good way to keep fit, as proven by his twenty-inch guns. He flexed a bicep in the mirror and resisted the urge to giggle like a teenage boy. Yeah, after all those years of Dorito's, 7-11 Big Bites, and Mountain Dew, he finally had muscle tone.

He still didn't quite have a six-pack in the belly, but hey, it was flat as hell and hard to boot. It was when you got below his stomach that the problems began.

Evan Whie had a huge dick.

Some might think that this was a plus or an advantage or made him extra manly. But all having a ten-and-a-half-inch cock had done for him was to bring him trouble.

Men hated him for it, and either stared at it enviously or made cutting comments about him to his face. It had ruined many a job interview, and he didn't even want to get started on how men reacted to him in locker rooms and gyms. It was why he had started working out at home.

And women... Women stared at it like it was an exotic mystery meat they had to try out just to say they had, or worse, they looked at him like he was a rapist if he got too close. He didn't think his dick was all that scary, but then again, he was used to it.

As for potential bed partners... He had once had a woman hold a whole conversation with his dick, cuddling and cooing at it, completely ignoring the man it was attached to. She had even had a pet name for it, and he'd thought only guys did that. So he had taken Little Ev and gotten the hell out of there before she'd decided to detach it from his body and keep it in a Mason jar beside her bed.

He was a bit of a horror movie buff and fascinated by serial killers... and she had been pushing all the wrong buttons.

After several brushes with disaster of the physically and mentally scarring kind -- like that couple who wanted him to dress like a cow and attach him to a milking machine -- he had decided that relationships were too complicated and he would have better luck with his left hand... or his right, if he was feeling frisky.

"Damn it, Lydia! Fine!" he snapped back, shedding the offensive pants and then reaching down to adjust the compression boxer briefs he wore to keep his cock-bounce in check before donning the custom-cut jeans he'd worn into this place. "I'm coming out."

"But the pleated pants!"

"But your face," he grumbled, dressing quickly, sliding his Crocs on his feet -- he really didn't have anyone to impress -- and making his way out of the dressing room.

"What does that even mean?"

He looked into the cool blue eyes of his best friend and main programmer and snarled, "It means whatever you want it to mean, Summerwell."

"If it means my boss is a tool, then I embrace the meaning." Lydia Summerwell was no one to fuck with.

She was six feet of blonde Viking -- not Valkyrie, but Viking -- and if anyone disagreed, she had no problem breaking them into itty-bitty pieces over her knee.

"Fuck you," he grumbled, trying to hold in a laugh at her smirk.

"Not with that cock-a-ma-jig you have swinging between your legs," she laughed, tossing aside the armful of pants she was holding. "Besides, you know that I'm only down for people I can dominate, and your little nerdy ass is too stubborn to give in to what you really want."

"Then I suggest you go after Cleo."

She glared back with more intensity.

He tried to rally with an eyebrow arch.

She countered with a smirk.

"Give me the damn pants." He was definitely not running back into the dressing room with his tail between his legs.

And in order to bolster his faint heart and get the fair maiden, he first had to have something to cover his knightly lance.

He snatched the pants that Lydia had retrieved and ignored her laughter as he stomped back into the dressing room. He would get the damn pants altered, or he would wear the kilt. Either way, it was clear he had to make a move if he wanted to claim Cleopatra Cockie as his own.

"The things I do for love," he grumbled, taking off his jeans once more before trying to squeeze all that was him into a pair of pleated front pants.

But in the end, it would be so worth it. Cleo would be his.