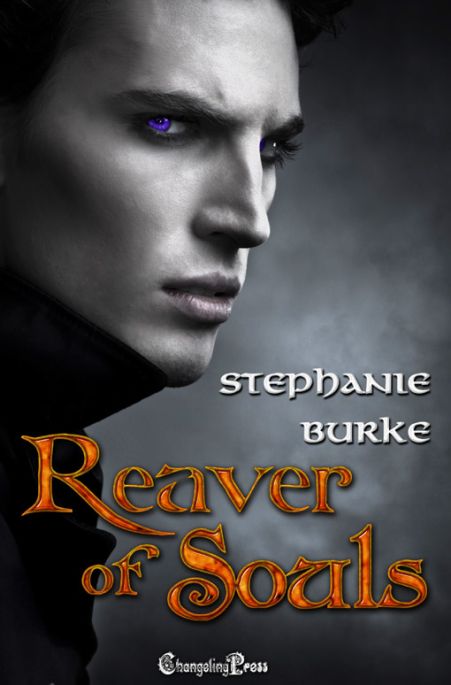 The Warriors’ Realm
Cursed at birth and barely tolerated in his childhood, Torn is a being divided. He is doomed to travel the magical realm secretly as the protector of innocence, The Reaver of Souls, a mythical being known for its ability to cleanse, heal, or kill evil. Betrayed by a greedy redhead with an agenda of her own, Torn finds himself pulled away from all he has known and loved, and magically sent into another realm.

Earth
Scotland has a huge demand for American artists and a special calling for one redheaded artisan in particular. Leaving behind her home and a difficult past, Sable, an up-and-coming sculptor, follows the call. A near-accident introduces her to the only man who has been able to arouse more than just her artistic passions. But with him comes a whole lot of baggage, including a pair of recently reconciled and concerned parents, a guard sent to protect him, and an insane ex-fiancée. Danger, greed, and duty threaten to pull the two lovers apart at every turn.

Torn has to learn to forgive the past and accept both sides of his soul. Only then can he expect his destined soulmate to see him for himself and accept him for what he is. He must merge the two sides of his soul in order to stop a crime of unspeakable evil and protect his woman, or he will exist alone, losing himself and his sanity in his role as the terrifying Reaver of Souls.

Excerpt
“You don’t have to do this.” His father sighed as Torn stood in front of the tall mirror and examined the cut of his white ceremonial uniform. “You know, you are quite young for a joining, and it’s never too late to say no.”

“I need her, Father,” he calmly replied as he brushed the long, dark, curly hair away from his violet eyes. “She makes me feel… not as alone.”

He turned his great, liquid eyes to his father, eyes that had seen more than their fair share of pain and misery. He absently nibbled on his bottom lip as he looked at the taller form of the man who had sired him, had raised him to know right from wrong, who had ultimately cursed him.

“Torn,” his father began, but stopped short when his son wrapped his arms around him in a loving embrace.

“I need to do this for me,” he said quietly in the silence that fell between the two of them.

His father stood stiff in his embrace, but now he was listening.

“I am tired of being alone, tired of that emptiness inside of me. Father, there is a hole where my heart should have been, and it aches for fulfillment.”

“And you expect to find fulfillment in the arms of that she-witch?” his father asked as he closed his eyes in pain.

It was his fault his son was so alone, would always be alone. Even now he was terrified of wrapping his arms around his only child, the child of his flesh, his blood. He still didn’t know if his reluctance to embrace his son came out of guilt or fear.

“Father, Zultha is not a witch,” his son’s amused voice breathed in his ear. “She is a bit undemonstrative --”

“She has a heart?” His father’s gruff voice was filled with contempt as he contemplated the woman his only child would join with. Damn it, he still couldn’t bring himself to embrace him.

“She has a heart, Father, a big one. The sex is not so important in a relationship. But the caring is.”

“Sex is not important?” His father took firm hold of his son’s shoulders and moved him back so that he could take a good look at his face.

He had his mother’s eyes. His son rarely smiled, but when he did, he saw his beautiful Nello in the joy that lit up his face. He had the height of his mother’s people, not quite as tall as his sire, yet he was powerfully built. That, Terror thought with pride, came from him. That and his unruly long, curly, jet-black hair. These were the loving gifts he had bestowed upon his son. The only gifts.

“Young man, sex may not be what you base a life joining on, but it certainly can make or break a relationship.”

He held in a smile as a bright red flush of embarrassment filled Torn’s face, highlighting his high cheekbones and his well-formed nose. His lips were full and wide, a mouth that would make any woman melt, but not this Zultha.

“Well, it was not all bad,” he said as he looked up into his father’s eyes.

“Not all… Save me from blind fools who don’t know their asses from a hole in the ground!” Terror sighed as he tightened his grip on his son’s shoulders. “You had sex with her,” he began.

“And I mean the whole thing, penetration and movement.”

Torn closed his eyes and thought back to the sweaty grinding that was sex. Oh, he loved the feel of a woman’s soft skin beneath his hands, the smell of her lush femininity, the sounds she made when penetrated, the gasps and begging moans, but it all seemed… different with Zultha.

Zultha had invited herself in one evening while he was reading by the fire, all long red hair and dulcet tones.

“I have what you want, Torn,” she’d purred, dropping the enveloping cloak she wore and exposing the pale, naked body beneath.

His breath had caught at the perfection of her form, from the bright pink nipples to the lush thatch of hair that covered her woman’s secrets.

Almost as if in a trance, Torn rose to his feet, nostrils flaring as he fought to control that small voice in the back of his head that warned of caution, and strode toward his intended.

Grinning, she stepped forward, allowing one hand to brush his chest as she stared into his purple eyes, reading the hunger that dwelled there.