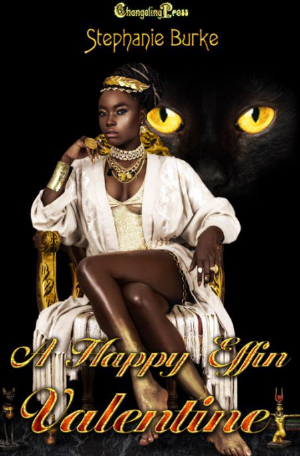 Masataka is a shape-shifting neko who makes the unfortunate mistake of picking up a stunning kitsune at a bar and taking her home for the night. How was he to know it was her wedding day? Or that her chosen mate was a nine-tailed kitsune of great distinction and power? Masa’s punishment is to be banished to Earth, stuck in his cat form until someone wishes for him to stay.

If it weren’t for bad luck, Effin wouldn’t have any luck at all. It’s Valentine’s Day, a day supposed to symbolize love and romance. Instead, it’s the worst day of Effin’s life. Whatever could go wrong, does. Abandoned in the middle of nowhere, Effin finds a homeless kitty. Charmed, she takes the cute, furry creature home.

It just so happens that the pretty kitty is actually Masataka, that lucky, lusty, shape-shifting neko. Suddenly, bad dates, worse clothes, and the sister from hell are a thing of the past.

Effin is the woman of Masataka’s dreams. Effin’s not so sure. It’s up to Masataka to convince Effin to believe in the staying power of love… and in her sexy lucky charm.

Excerpt
Effin was not having a good day.

In fact, not since Vesuvius had erupted and tons of hot volcanic ash had descended upon the denizens of Pompeii had anyone had a bad day like this. Come to think of it, bad was too minor a word. Her day had been vile, loathsome, horrid, terrifying, disgusting, and monstrously illogical.

And it all started on February thirteenth -- Friday, February 13th, when Effin Damnwell Hurtzs opened her mouth.

Her mother had always warned her to think before she spoke, a trait she lacked, and a tendency she shared with her mother. “That little pink thing in your mouth is going to get you into a world of trouble, Effin.” Her mother sighed, shaking her head as if she knew that trouble for her eldest daughter was inevitable.

Hell, she was born during a leap year! Double hell, if Effin’d had any luck at all, Trouble would have been her middle name.

She came upon her unusual moniker by accident. When her mother, doped up with painkillers and sedatives, was asked two different questions at the same time after a forty-three hour labor, this was the result:

Her father: “How does it feel?”

The medical receptionist: “What shall we name this beauty?”

Her mother’s response: “It effin damn-well hurts, you bastard!”

Her father had finally learned to keep the pink thing in his mouth still, especially after his loving wife ripped out a handful of chest hair.

The medical receptionist had sniffed: “You don’t have to be so mean about it! I heard you just fine!”

The result: A tiny, beautiful little chocolate baby girl stuck with a name that would ensure future school fights and taunting for a lifetime.

And now, how Effin wished she had taken her mother’s advice to heart, especially after she recalled how she’d got her name. But no! Effin Damnwell Hurtzs had to challenge fate and miscellaneous creatures by loudly declaring, “There are no such things as gremlins!” when her best friend confided that she was being plagued by a goodly tribe of them.

And what’s even worse, she made her declaration on Friday, February 13th, black Friday, the unluckiest day of the year.

After ignoring her best friend Christa’s horrified stare, she went home, had a nice mug of cocoa laced with a liberal shot of Cask & Cream Caramel Temptation, indulged in a nice hot bath, and retired to her boudoir to dream wonderful dreams of the blind date Christa had set her up with.

According to Christa, her date, Buster, was a CPA with an MBA and drove a BMW. The brother was supposed to be fine as hell, independent, didn’t live with his mother, had a lucrative job that ensured he wouldn’t be hitting her up for loans, and had impeccable social skills. That meant he had proper pronunciation and would say shrimp instead of scrimps, would chew with his mouth closed, would not brag about himself, and she would not suddenly determine that his ethnicity was actually Russian or Roman from the speed and accuracy of octopus hands.

Yes, Effin went to sleep with a smile on her face, her tummy warm and full, feeling sated and altogether pleased with herself.

Life was good, and tomorrow, Valentine’s Day, it would only get better.