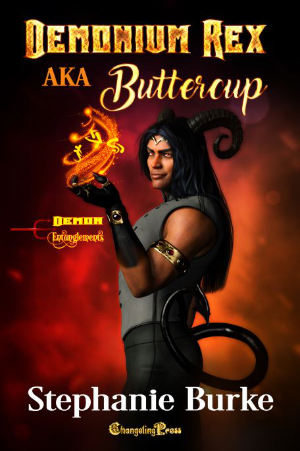 Win is a writer with a new house, a new life, and a rapidly approaching deadline. She doesn’t have time for the voices in her head to be demanding attention. She just wants to finish her book and maybe get laid. But what will she do when the character her subconscious dreams up starts becoming corporeal?

Demonium Rex is the undisputed king of all sexual demons, but when his people come to him with a mark who refuses to crack, he takes action. Now he is stuck in a non-corporeal form while the woman he needs to seduce is too stubborn to just let it happen. And even worse, she sticks him with a stupid name. But in the end, he will show her who’s the real King -- or his name isn’t Buttercup.

Excerpt
“Who hurt you?”

Wineva Waller had never felt so warm, so safe, so comforted. It was like she was being wrapped in a huge, soft, silk-lined quilt, or more like floating in a deep pool of the warmest of soft-perfumed waters. It had to be a dream, a lie. There was nothing soft in her life, had never been, would never be.

But why not enjoy the escape and live the fantasy while it lasted? She couldn’t do a lot of things for herself, couldn’t care less about the way the world worked or how people viewed her, but she could at least give herself this, even if it would dissipate like wisps of dew in the morning sun.

There were arms around her, solid and muscular, holding her in a warm embrace that canceled out worry, stress, and time. There was a large male body pressed tightly to her, a hard, fuzzy chest that her breasts were pressed deliciously against, chin nuzzling in the top of her hair, heavy, muscular legs entwined with hers.

As she contemplated who it could be, a large, warm hand slid up from her belly to cup her breast, the palm rough against her nipple. She couldn’t stop the moan from leaving her mouth as that clever, beautiful hand caressed her flesh, the fingers tugging sharply at her nipple, causing her to arch her back as the pleasure shot down her spine and settled in her pussy. She was getting so wet.

“I can feel how much you want me,” the voice purred as a second hand slid down to comb through the neatly trimmed patch of hair at her groin.

Win whimpered, feeling the need to be touched grow inside her. Those fingers were moving too slow. She needed more, she wanted more. She opened her mouth to complain when one of his legs shoved forward, parting her thighs, and she shivered as the cooler air of the room wound around her needy pussy.

“I’ve got you,” the voice insisted as warm, citrus-scented breath caressed her ear. There was a nip there as the fingers teased her mound, sliding down further, the tips caressing the root of her clit, and that one touch made her gasp, arching her hip to get more.

It felt so good… it had been so long…

“Please,” she whimpered as that knowing finger began to run small circles around the base of her clit, making her whole body tremble as she moved her ass back against the hard length of cock.

“Who hurt you?” he asked again, his lips trailing down the back of her neck, his warm breath caressing her skin.

As she tried to figure out what he wanted, there was a sharp nip and then a solid bite to the base of her neck. Sensations she hadn’t experienced in a long time shot down her back as the hand caressing her breast slid up to wrap gently around her neck.

She began to pant, her heart was racing as his hard cock began sliding against her cheeks until the hot bar of flesh was settled between them, not trying to penetrate but just caressing her there too. The feel of him was intense and as she opened her mouth to demand more, the clever fingers at her groin finally moved lower, gently sliding back the protective hood of her clit to lightly caress her tender skin, pulling a whimper from her throat. Her hips began to rise up, seeking more of that electric touch, tearing her breath from her body as her heart began to race even faster.

“Please,” she begged as he began to take control of her body, playing her like a fine instrument and pulling sounds she would have been embarrassed were hers in the daylight.

“I have you.” His voice was deep and rough, his heart pounding in his chest as he turned her and this time pressed against her back to the bed. She could feel it racing, matching the tempo of her own rapidly beating heart as she rocked back against him.

She opened her mouth to demand more as his fingers began to press and tighten around her clit. Win could feel her slick wetness slowly slide down, soaking her swollen labia that was also begging for a touch. She tried to push her hips forward, to force his fingers where she needed them the most, but he only chuckled at her action.

“Who hurt you?” he asked again, biting down harder on her shoulder before he licked the sharp pain away.