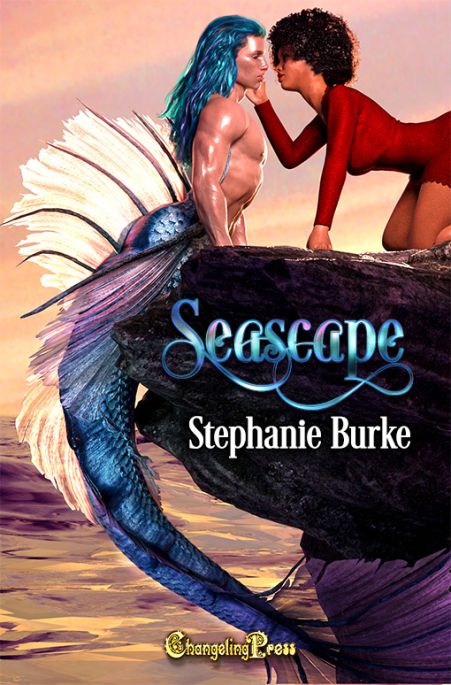 How sexy can a woman be after being tossed out of a plane into the deep blue sea? Very, apparently…Dr. Elanna Richfield, a world-renowned oncologist, is tossed out of a small, hijacked plane by a drugged-out fanatic over the Pacific Ocean.Storm is minding his business, sunning himself on the waves, doing what Merfolk do on vacation, when a beautiful, dark-skinned human falls into his lap.

Elanna thought she would never see the light of another day -- especially from several fathoms below. But Storm opens up a world she has never seen. A world filled with magical, elemental creatures of unending beauty and mystery. A world filled with political intrigue and danger.Now if she can survive mystical transformations, jealous queens, and the dictates of a ruling council, she may very well discover true passion and desire within her Seascape.

Publisher’s Note: Seascape by Stephanie Burke has been previously published by another house. The current edition has been edited for formatting and typographical errors only. No content changes have been made.

She closed her burning eyes, dried from the air, as she felt the mist from the waters and heard the roar of the wind as it tore her hair free from its bun. Then she slammed face first into a brick wall.

Storm was doing what he loved best. All by himself, he lay completely still and let the waves ripple over his bare skin.

He stifled a groan as heat suffused him, turning his muscles into mush and causing his brain to shut down.

Nothing could get to him now! At this moment in life, everything was perfection. He looked up at the bright blue sky, inhaled deeply of the fresh air, and smiled. And then it hit him.

Not some grand plan to spend the rest of the day loafing, or some great idea to increase his fighting potential, but a hard, plummeting body.

“Shit!” he bubbled before he went under. Instinctively, he grabbed onto the body that hit him, wondering if it was still alive. But then he slowed their plunge into the depths of his waters by spinning and then flipping himself onto his back.

Gradually his momentum slowed and he began to kick to the surface of the water again. The body had knocked him straight out of the jets of warm water that flowed freely from the volcanic rock and plummeted them a few hundred feet below the surface. If the body was still alive, it would need fresh air, and need it soon.

Knowing that the time for this human was dwindling, he decided to act. Tightening the muscles of his abdomen, he began to spin and twirl, forcing his body to undulate out of the downward plunge, slowly propelling him and the human to the surface. Too fast would be just as deadly as drowning.

He tightened his hold on the body, struggling to maintain his grip as the sea threatened to snatch his find away from him.

Closer and closer to the surface he spiraled, feeling the water temperature increase even as the sun began to cast its watery light around him.

He could detect no movement from the human -- no struggles or panic -- and that frightened him enough to force him to increase his pace.

With an uncommonly loud splash, his head broke through the surface of the water.

He flung his sodden hair behind him, paying no attention to the droplets of water that flew like diamonds around his head.

With another gigantic effort, he tightened his hold on the human and forced its head to the surface. But it wasn’t enough -- he needed to get to some type of land.

Noting that the lava formations he had scouted out weeks ago were only a few yards in the distance, he gave one mighty flip, and in seconds he propelled them toward the floating mass of rock.

Was this human alive, or would there be another body to feed to the scavengers on the bottom? he wondered as he held the human closer.

Moving quickly, he soon came to the rock mass and hefted the human onto the stone, using the incredible strength of his arms and being careful to protect the head and back.

Still half-submerged in the water, he impatiently brushed his turquoise hair behind his shell-shaped ears, and began to examine the body -- the female, he amended as he noted her body beneath the tattered red cloth she wore.

Closing his eyes, he rested his hands, with their long nails, an inch above her form and began to seek.

Using the power flowing through him like the waters of the sea, he began an intimate search of her body, categorizing her injuries, making ready to repair what he could.

Her right arm was broken, but that was a common problem and easily remedied. He made a note to set it, then continued with the search.

Her pelvic bone was crushed -- a bit more difficult, but it could be repaired. Three of her ribs were broken, one puncturing her lung. Because she was human and didn’t have a back-up set to breathe with -- or even gills for that matter -- the puncture was his first priority. Putting his diagnosis on hold, he moved his attention to her ribs and her damaged lung.

Reaching into a sealskin pouch hanging at his waist, he produced a small bag of herbs, smiling as the sun caused the normally bright colors to dull. It may not be human medicine, but it was effective, nevertheless. He took a deep breath before putting a pinch of the powder into his mouth. He tilted her head to the side, draining it of water, before clapping his warm, firm lips over her cold blue ones.

He forced the powder into her body, mentally directing it to her lungs. In a matter of seconds, the color began to flood back into her face as the powder latched onto the lining of her lungs, repairing the tear even as he rested his hands upon her chest, repairing the damaged ribs.

In minutes, she took a deep breath, gurgling a bit with what water was still left inside her body.

“Gills would have been so much simpler.” He lifted his head and sighed, then placed both hands upon her shoulders. He turned her to her side easily, patting her back as her unconscious body forced the water from the newly repaired lung.

He gently placed her onto her back again, and began to repair the rest of her battered body.

“Humans are so stupid,” he said to the woman as he worked, expecting no answer and receiving none. “To throw a perfectly good female away, you had to be stupid or crazy.”

With a sigh of disgust at the peculiarities of humans, he slid the woman back into the water and carefully began towing her to a place of safety.

The small island he had in mind was big enough to hold her until he could find a way to get rid of her. He did not need this complication in his life, but as a Master Healer, he had no choice but to help her. Sometimes, his morals got him into trouble. As he looked down at her caramel-brown skin, he felt that warning tingle start deep in his stomach.

So much for loafing the day away.