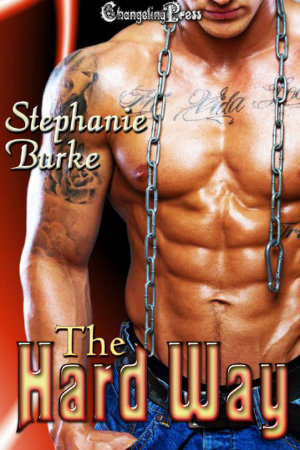 From the twisted mind of Stephanie Burke come some of the strangest tales you'll ever read!

A Man Called Lust: Sinopee doesn't want to lose her lover, but how can she stay when it may mean both their deaths?

Three the Hard Way: Perfect submission was never this hard... or this good.

The Sincubus (13th Floor): When worlds collide and ideas change, anything can happen... on the 13th floor.

Still Waters (13th Floor): She challenged his ideals and his body. But is it enough to escape the 13th Floor?

As always, I first felt a chill as I pressed one hand against the glass.

The mirror was all the vanity that I have left. All of my femininity, the only thing of beauty that I own. And as I leaned against its familiar chill, I again prayed that this time I would find a way to stay.

The hand I held was warm, pulsing with light, almost hot to the touch. And he was mine.

Pressing harder, I began to feel the barrier of glass, like some thick gel, part for me. Its coolness eased past my face, making my nose itch as I began to force my way through. That warm hand was a beacon urging me to move faster. I closed my eyes and my body tingled as my face began to pass through.

This was always the hardest part, the face. Even the popping of my ears never sent a shiver up my spine as the coolness of magic and time slipping by, as if it would rip me back or toss me into an eternity lost in a void of darkness. I never watched. Once I had opened my eyes and was almost thrust into shock as the colors filtered and danced before my eyes. They surrounded me like they knew I was something that didn't belong.

But as soon as I felt the coolness on my neck, the hand that still held mine gave a tug, and almost like a pea popping from a pod, I was forced through. I was free of the mirror and once again, I faced my love, my life, my air, my reason for being.

“Sinopee,” he said as I threw myself into his arms. His voice was as raspy and deep as I remembered.

“Lust,” I breathed into his chest, inhaling the rich scent of him, almost tasting him as I lost myself in his touch. His name was Luster, but I called him Lust. And oh, how he sparked and shone in the sunlight.

His large, almond-shaped, lavender eyes perfectly matched his hair, which was so silver it sparkled. The long mane hung to below his buttocks and shimmered with his every movement. His skin, so pale and delicate in appearance, gave him an elf-like quality, an illusion supported by his set of high, pointed ears. But that was all that was fae about Luster.

He was over six feet of strong, muscled warrior. The sword that hung at his back was no mere ornament. I had seen him practice with the sharp blade, and he could do serious damage when he wanted.

As always when he greeted me, he was dressed only in tight black leather pants and knee-high boots. The silver ring in his left nipple glistened, as did his hair, as did his whole body. On his wrists was a set of huge, black braces, tooled with the name of his clan and the land that he was born to control, but was denied... by them.

“You have come back to me.” His hands, those warm, work hardened hands, caressed my face as he lifted my head to meet his gaze.

“I will always come back to you. You are my life.”

“I am your fuck toy and you know it.” His rumbling laughter belied any seriousness in his tone.

“And I only have a day, so let”s get to it!” I playfully demanded.

“Commanding creature,” he hissed, tangling his hands in my thick hair. “Do you not know who you order about?”

“Yes, my fuck toy, and the best fuck toy I ever happened to own.”

“Own? Me? Great warrior that I am? It is you who are my object. And it is you who will find herself in serious trouble if you do not give me the respect I deserve.”

One would almost think he was serious, if it were not for the laughter sparkling in his eyes.

He threw his head back, roaring with laughter, this merry sound carrying over the lush green grasses and tall trees that I would have never experienced had he not performed the sacred ritual that drew me, through the words in the letters, through the mirror.

“I have missed you, Sinopee.”

“And I you, Lust,” I replied, tears welling up in my eyes against my will.

“None of that! You have time for tears after the mirror draws you back. For now, I intend to enjoy what I have missed during your long absence.”