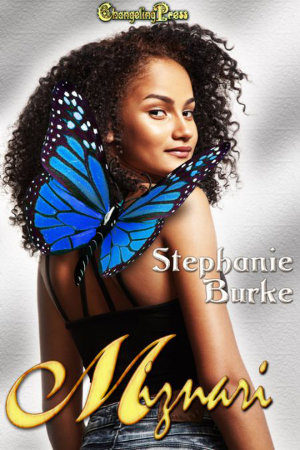 Miznari Anderson just discovered her life isn't as perfect as she imagined. Her boyfriend Mike has the hots for her best friend, Aaron, and now a blue fairy with a broken wing just dropped into her lap. Then the twelve-inch blue fairy turns out to be on the run from an evil pirate who wants to steal his sperm, have his baby, and make herself the next ruler of his planet.

Kell may be blue, and he does have wings, but he's not a fairy. He's the prince of his planet. He's also a shapeshiting warrior who has the hots for Miznari. Now Kell has to defeat the evil Stinza, find a way to neutralize her mind altering drugs, and figure out how to keep Miznari.

Easy enough for a determined hunk of a winged blue warrior like Kell. All he needs to keep Miznari happy? Lots of love and sex.

Publisher's Note: Miznari was first published many years ago in a multi-author anthology.

Excerpt
The elevator doors opened and Miz was greeted by a group of people, all in strange otherworldly costumes, giggling and having the time of their lives. She pushed her way in and stood in front of the doors, slamming her finger on the lobby button, trying her best to ignore the sounds of the shiny happy people.

Why the hell were they so happy? There was a bug of some kind, with three beer bellies and a beard that was longer than the hair on her head. There was the shortest Amazon she had ever seen, wielding a plastic sword and seeming to possess the world in her hands. Then there was this horse-looking thing that she couldn't tell -- was it a man or a woman?

But they were all happy, their radiance contrasting starkly with the emptiness that was eating its way into her soul.

The doors could not have opened up faster. As soon as they began to slide to the sides, she exploded like a bullet from a gun. She made it three feet before she stopped again. All around her, the lobby had been transformed into something that looked like Mars. There were space creatures everywhere, alien and warriors, models and writers, reporters and curious readers.

The old Miznari would have jumped at the chance to join the fun, to be a part of the shining glittering throng. But with her awakened eyes, all she saw was the plastic facade and the nothingness it offered her. Her face dead, she turned and made her way to the exit, pushing past a group of fairies and vampires on their way inside.

She needed air. She couldn't breathe. But there were more of them in the parking lots. People everywhere, sucking up the air, mocking her with their happiness, their smiling faces and their lives filled with purpose, even if that purpose was just to enjoy themselves for the night.

It was too much. She couldn't take it. Turning, she made her way to the rear of the building, to the Spectacular Mountain Range, and cold empty fields that backed the new hotel. Breaking into a run, she felt the tears flow freely as she scrambled over scrub grass and rocks, as she sought to escape, to make the pain go away.

She ran, her feet pounding on the hard-packed earth, her legs jarring with each punishing stride, her breath rasping in her body, her tears flowing freely. She ran. She ran until she was suddenly airborne.

A frightened shriek sprang past her lips as her arms windmilled to keep her balance. But she was flying. Up, up, up. Then down, down, down. And the hard earth was waiting there to catch her fall. She landed with an audible oomph that tore the air from her lungs and sent her skidding across the rocky ground.

"Damn," Miz grunted as she slid across the earth on her chest feeling every hard rock and soft lump of flesh...

"Oh God," she gasped as she struggled to her feet, looking around for what she fell on. Were there skunks in Virginia? Was it a cat? It was too little for a cat. A rat? Eww. Rabies? Was it a snake or a... ?

It glowed. Miz rubbed her eyes in disbelief as she stared down at the crumpled bit of glowing flesh that lay in the indentation her body made as it skidded across the fresh black mountain soil.

It was no more than a foot long, and it glowed faintly blue. There was a set of wings with strange black... tattoos, but one wing lay at an odd angle. It was covered in long bluish-white hair that shifted as its breaths moved its chest frantically in and out.

"Miz," she gasped to herself as she stared in disbelief. "You landed on Tinkerbelle." Bending over, she tentatively reached out her hands to touch it, jerking back with a moan as it gave a lurch and tried to sit up.

The thing shuddered, then turned its head in her direction.

Miz was caught by a pair of almost milky-white blue eyes. It shook its head, and as she watched, it sat fully up, wincing, as its movements pulled at the injured wing on its back. It cradled one arm as if it hurt, as it seemed to gather its bearings. It glared at her, she knew, but as it used one hand to toss its hair behind its back, she noticed that it was a he. It was wearing a loincloth of some rough-looking material and he was not happy.

"Oh geez," Miz moaned as she practically danced from foot to foot, wanting to get close to help it, but not sure if she should. Finally reaching a decision, she reached down to touch it, and watched as it began to more than glow. The thing lit up like a drunken Southern belle at a Rough Riders convention.

Was it going to hurt her, seek its revenge, cast some spell?

Whatever it was doing, it glared up at her as it began to glow brighter and brighter. Then in a flash, it seemed to explode, blinding Miz as she desperately tried to see what was going on. As her sight cleared, she noticed that he now lay prone on the ground. Not moving, not glowing.

Stealth was never a game plan with Miz, so the skulking through the lobby filled with partying people, rather than making a grand entrance, was hard. But she had to do what she had to do. And what she had to do was sneak the little glow bug back into her room without letting anyone in on what she had. She stuck her head around the corner, Tink bundled up in her jacket, and began, as unobtrusively as possible, make her way to the bank of elevators across the room.

"I hope I don't have to explain this," she muttered to herself as she tried to remember if there was ever a penalty placed on those who killed a fairy. She needed to bone up on her fairy lore, she decided as she made it another few feet without being noticed.

Hunched over a bit, she cut her gaze to the right and the left before darting around an aging Joan of Arc, and sidestepping around a six-foot Yoda. "Almost there," she muttered, wondering when she had picked up this habit of talking to herself, when she collided with a large form and found herself falling back on her ass, where she bounced twice, clutching her bundle to her chest.

"Watch where you're going," she growled as she looked up and groaned. "Aaron," she sighed as her shoulders drooped. "What did I do to deserve this day?" she asked herself again, rolling her eyes as she realized she spoke out loud and Aaron's face was now filled with guilt.

"Miz, let me explain," he stuttered quickly, reaching down to offer her a hand.

Now Miz was in a quandary. Should she accept his hand and his unspoken agreement to listen to him while exposing a glowing blue fairy that she couldn't explain and quite possibly murdered, or should she be a total bitch and get up on her own, giving him the unspoken clue to fuck off?