In The Company of Strangers 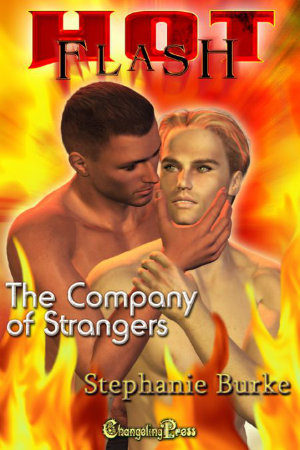 Cosimo has a fatal addiction to cute. And when the ex-Marine is sent to guard a space bunny from Mars, he finds himself doing a lot of illegal sabotage to keep him safe. But that doesn't mean he expects to be anally probed and turned into the perfect consort for a hot, humanoid, alien bunny with the dick of death.

Tissor has found his time on planet Earth a huge waste of time, save for the human who nearly got himself killed protecting him. So when he leaves, he decides to take Cosimo with him and keep him as his one and only consort.

Excerpt
There was a pole up his ass.

Of all the ways he could have chosen to wake, this was not one of them. The beeping of the machines that surrounded him drew him closer to awareness, and Cosimo tried to remember what had happened. The last thing he remembered was the alien.

He inhaled deeply, the last vestiges of sleep falling away. He was on his stomach, and whatever he was resting on was damn comfortable. It was a far sight better than what that poor creature...

A shifting of the pole in his ass sent a flash of heat flowing through him as his nerve-endings began to tingle. His stomach tightened and his balls shifted as he felt his blood race to his dick. He moaned as he wiggled deeper into the soft, furry surface that held him, almost all thoughts leaving his body.

His hips began to shift, to push back on the wide pole invading him, getting more of the delicious sensations. He arched his back as his control faded fast. From the tips of his toes to the top of his head, all he could feel was heat -- terrible, draining, consuming heat.

Sweat beaded over his skin as the head of his cock became so sensitive that each grind of his hips left him leaking, soaking the material beneath him with his slippery precum. And it wasn't enough. He needed more. He wasn't filled enough. He wanted to be stretched, split wide open and fucked hard.

He wiggled his hips, desperately seeking relief, but the pole that pierced him didn't move. It was too short, too thin to feed his hunger. If he moved a certain way, it grazed a spot inside him that made lights flash behind his eyes and tore a low grunt from his throat. He had to hit it again.

Cosimo recognized the indignity of the situation -- the Chief of Security, a decorated war vet, a man who could kill you seven ways before you hit the ground, with his face down, his ass up high, begging for a thicker piece of pole to fuck himself on. But this just felt too damn good.

All thoughts receded, his memory went blank, and all that mattered was getting his ass drilled and filled in the worst way possible. His muscles strained and he arched his back deeper, trying to make that damn pole hit that spot just right. Growls flowed from his throat. His elusive release was getting closer as his hunger grew. It consumed him and he tightened his muscles around the pole, desperate for anything that would bring about his climax. His ass quivered and he threw his head back, his mouth open, his breath tearing from his throat. "I -- can't," he panted.

The voice roared like thunder, and with it small jolts of electricity began to run through the suddenly too-small pole in his ass.

"Fuck!" Cosimos screamed as the first jolts hit him. It wasn't enough to hurt or burn, but it stimulated the nerves in his ass like never before and ripped sensations from his body that were hellish and heavenly all at the same time.

"Eventually. But you are not ready yet."

Before he could voice an opinion on the matter, the pole began to widen, to stretch enough to tease his ass more than before. "Oh, God," he moaned, his head dropping as his ass lifted higher.

Cosimos suddenly knew what it felt like to go insane. This was what he wanted, and it wasn't enough. His body was being played just the way he liked it, but the need was going to kill him.

He hung there, sweating, panting, holding his ass just so to get the full benefit of the pole... and then it started to move.

"Fuck!" he roared again, throwing himself back into the movement as a quiet, whirring sound filled the room. He was being fucked by a machine, but it still wasn't what he needed.

The hand running through his hair was a shock. He looked up and froze despite all the stimulation being applied to his body. "You!"

"Me?" came the drawled response. "Are you surprised to see me?"

Then all his memories came flooding back.