In the Red Zone 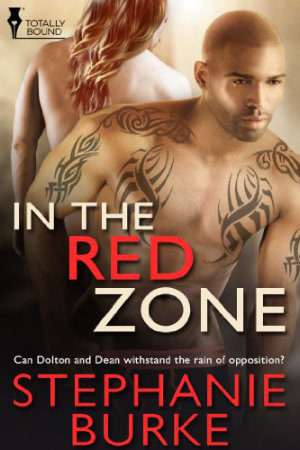 Can Dolton and Dean withstand the rain of opposition when they come together and cross the line of scrimmage?

Dolton is a strong black man, confident in what he wants in life and how to get it. The adjunct professor at Northeastern University has multiple degrees and has travelled the world, learning from the people he observes. So why is it that blond hunk Dean Majors has his mind twisted, his cock hard, and his reactions all out of whack? Dolton knows he has to have the beautiful man, and will do anything to get the long-haired god in his bed and in his life.

Dean Majors is a construction worker by trade and the heart of Team Griffon. He is not closeted gay man, but he doesn't advertise his orientation, either, something he is happy about when his old friend Robbie Keton joins the Griffons. Robbie's negative attitude is something he has to distance himself from, especially when he realises he has a more than man-sized crush on the team's uber-intelligent and exotic middle linebacker, Dolton Pride.

Together the two men are a potent fire, their lust burning hot. But can it withstand the bitter rain of opposition and threats to their happiness when they cross the line of scrimmage?

Publisher's Note: This story has been previously released as part of the Out of Bounds anthology by Totally Bound Publishing.