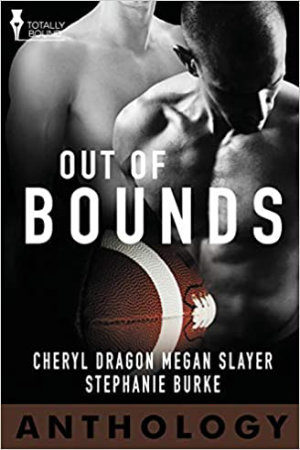 'Making the Pass' by Cheryl Dragon

On the field and in bed, Aiden and Jack are a perfect match. But when reality and pride interfere, will they be able to become a team

Aiden and Jack are both hot, gay men and play weekend football for the Griffons. Their similarities end there. Jack is blue collar and sees both the attraction to Aiden and the divide between them. His career is delivering packages to fancy offices, including the one where Aiden works. On the field, they spark and win, but it takes a friend's nudging before Jack turns the mutual macho posturing to passionate sex.

The physical connection between Aiden and Jack is easy, but they'll need extra practice for the relationship part. Aiden tries to fit in with Jack's friends, but when Aiden invites Jack to an office party, Jack refuses. Thankfully, the rift won't stop the game from progressing, and neither man is a quitter!

'Crossing the Line' by Megan Slayer

Opposites can attract and sometimes come together with explosive results.

Ryan Malone punts for the Dragons and likes his life as an art restorer. Love isn't in his game plan—unless Paul Toth is involved. They've known each other forever but have never taken the next step. Ryan's not sure if Paul can accept his kinky needs. All it takes is one chance to see if sparks will fly.

Paul's ready and willing to snag the sexy punter. He doesn't care what team Ryan plays for as long as he's got Ryan at night. But Ryan's holding something back. Can Paul unlock whatever he's hiding before their burgeoning affair gets struck down by penalties?

'In the Red Zone' by Stephanie Burke

Can Dolton and Dean withstand the rain of opposition when they come together and cross the line of scrimmage?

Dolton is a strong black man, confident in what he wants in life and how to get it. The adjunct professor at Northeastern University has multiple degrees and has travelled the world, learning from the people he observes. So why is it that blond hunk Dean Majors has his mind twisted, his cock hard, and his reactions all out of whack? Dolton knows he has to have the beautiful man, and will do anything to get the long-haired god in his bed and in his life.

Dean Majors is a construction worker by trade and the heart of Team Griffon. He is not closeted gay man, but he doesn't advertise his orientation, either, something he is happy about when his old friend Robbie Keton joins the Griffons. Robbie's negative attitude is something he has to distance himself from, especially when he realises he has a more than man-sized crush on the team's uber-intelligent and exotic middle linebacker, Dolton Pride.

Together the two men are a potent fire, their lust burning hot. But can it withstand the bitter rain of opposition and threats to their happiness when they cross the line of scrimmage?