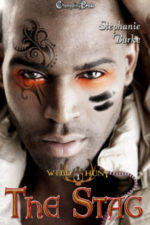 Now The Stag, Kern, is on the prowl -- but he wants more than a one night stand with his perfect Faunus. If he can only convince his little mate to take a chance on him, and still protect his not-so-innocent lover from those who would do him ill for the magic contained in his body…

Caille knows the hearts of men, and she has been ripping them from their chests for centuries. Now, as a member of the Wild Hunt, she wants nothing more than to rip apart the men who dared steal one brother’s mate and kidnap her other Hunt brother. Nothing and no one will stand in her way… even the curiously attractive new partner The Master of the Hunt has given her.

Bran the Blessed had been in a cave for what seemed like an eternity, growing back his body and learning about the new world with the aid of his companion crows. He relied on no one except his friend, Kern, who brought him out of his solitude and offered to introduce him to the new world. Problems arise when his friend’s mate has been kidnapped by murderous cultists, leaving Kern unable to function. There is no way Bran, the once-powerful King of Wales could not assist with this hunt as a new Huntsman… and then there was Caille.

Instantly intrigued with each other, the two Huntsmen become pawns in a dangerous game where the elite go to satiate their darkest desires and where the cultists themselves hope to gain more power and influence. Vowing to protect this budding relationship, Bran will do anything he can to protect his new family, even if it means he became one of those who play with wolves.

After observing the mistakes made by his fellow Huntsmen, Arcas, the Bear, refuses to follow their example. He immediately claims his mate, a descendant of the cat goddess Bastet. Their pairing will be powerful and his mate is courageous, wise, and sexy as hell. Too bad they have to bring down the remnants of a murderous cult and stop a demonic disaster from being let loose on the world.

Marshal is no fool. From the moment they met, he has been drawn to the red-haired Bear. He didn’t think world ending events would ensue to make their developing relationship a bit more difficult to navigate. But now The Hunt was on the move and nothing would stop them from achieving their goals: rescue Kern’s mate and save the world.