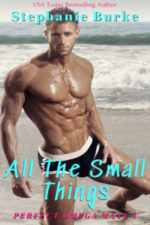 The more unbearable the pain, the richer the rewards.

Tego is a strong independent omega who doesn’t need a mate. Well, in actuality, he is larger and more dangerous than any alpha could handle. He is alone, and he likes it that way… Until he runs face-first into trouble.

No matter what he says, Daiki looks like a yakuza boss. With a sword on his hip and smelling like sin in the bedroom, the Japanese Alpha has a low dark way of speaking that makes Tego’s brain melt and his omega wolf-self roll over and bare his stomach. Before he knows it, Tego is on his knees being claimed while the whole world watches.