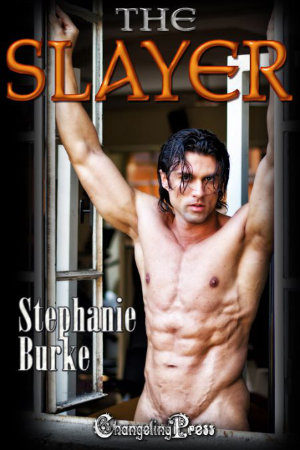 Revenant is what they call him. For centuries, Kye has not lived, he has merely existed. Moving from city to city, continent to continent, Kye is always searching for the one man who visited upon him the destruction of his family and the shattering of his soul.

Tali is a woman with a mission of her own. Her objective, find the vampire Balthazar and, by any means, send what is left of his soul fleeing from this life.

Publisher's Note: This book was previously published and has been re-edited for this release.

But a man -- he snorted at the thought -- had to do what he had to do. With a grimace of disgust, he quickly prepared the small plastic bottle and thoroughly cleaned his insides before he headed for the showers. He had to scour away the feeling of violation before he soaked in the vanilla scented waters he'd prepared earlier.

The comforting smell of the perfumed steam was incentive enough for him to hurry through his scrubbing so that he would have adequate time to soothe himself in the steaming waters of his bath.

He stared down at his feet morosely, watching the last of the soapy water roll down the drain, before crossing the tiled room on silent feet. Walking quietly had become second nature to him and more than once it had saved his life. With a barely audible sigh, he lowered himself into the hot water, shuddering slightly as it first burned then loosened his muscles, preparing him for what lay ahead.

He closed his eyes, inhaled her scent, and allowed his thoughts to drift.

Tonight could be the night he found the peace he craved by gleefully slaughtering that bastard and bathing in his blood.

It always came down to his maker and the blood. Both tasted of regret and salvation. The blood and Balthazar were all he craved, hated and feared.

He remembered his first taste, as her blood spurted wetly from her neck, her eyes going wide in pain and fear before they began to glaze over in death. He remembered the tearing at his own throat, his own screams and how sweet Balthazar tasted. How he'd begged for more.

The discreet beeping at his wrist pulled him from his circling thoughts. He had wasted enough time pampering his flesh. It was time to go to work. He rose from the tepid waters, his hair flowing down his body like dark silken waves, clinging to his muscled flesh as he stepped from the tub.

Heedless of the water that splashed the floor, he grabbed a large bath sheet from a rack and wrapped up his dripping hair, the scent of vanilla and cinnamon followed him as he moved. Vanilla was a comforting smell, but also one of remembrance. He would remember always how she delighted in its scent, how after days, she smelled like candy and rot.

He spun around to exit the bath, the smooth pale scars that scored his back catching the light from his bedroom. He'd worked hard so no scar tissue would hinder his movements, worked for years to make the scars soft and supple as the rest of his dark skin.

His eyes were a strange combination of green and gold that constantly warred for supremacy. It had a way of unnerving people, those swirls of green and gold, and that suited him just fine. He wanted to unnerve people, to make them back off with only a stare.

"Thank God gender-fuck is in," he muttered, as he stopped in front of an expansive wardrobe. With his delicate features and a few strokes of a makeup brush, he could easily make himself look ultra-fem, though his masculine jaw line and the way he moved marked him unmistakably as male.

He tugged the towel away from his hair, tossed back the chin-length bangs that framed the front of his face, and whipped the long mass back over his shoulder.

Quickly he fashioned a long braid with the still slightly damp knee-length hair. He left the fringe to frame his face, making it easy to shake over his eyes and hide his face from scrutiny. He tied a small chain of bells to the end of his braid. It didn't matter that they tinkled lightly as they brushed against his bottom; he could make them silent when he chose but that sound would likely drive his intended target mad as he tried to discover where the light, joyful sound came from as he was stalked and menaced.

Sometimes, he thought ruefully, he was a bit like a cat, toying with its prey before moving in for the kill.

In the length of the braid he hid seven long metal points, thin enough to be hidden totally in his hair, but strong enough to bring death at a distance.

Tucking his fringe behind his almost too-delicate ears, he returned his attention to the closet.

He pulled a pair of butter soft snow white pants from their hanger. He would have to be careful of the blood. He really liked these pants and no matter how you scrubbed, blood always left reddish-brown stains on white leather.

Slowly he eased the pants up his legs, loving the feel as the leather instantly conformed to his skin. These pants were tight enough that underwear was all but impossible. The pants closed with a thin leather thong that laced across his tight abdomen, emphasizing the muscle definition there as well as exposing the thin line of soft dark hair that started just beneath his navel.

His boots were cross-tied with silver buckles, leaving spaces for the knives and pockets that easily fit beneath the straps. These boots were also made of leather and had very low heels, heels that could be twisted the right way to expose secret compartments that were extra security for a man in his position.

Digging deeper in his closet, he pulled out an embroidered black and red knee length tunic. The Oriental style cut of the tunic included a banded collar and shoulder fasteners of white roped silk. The silk garment was light and easy to maneuver.

After securing the inside and shoulder fasteners, he stepped back to examine himself in the mirror. He looked like a beautiful, androgynous, and sadistic wet dream-- almost like his true self. Turning, he wrapped himself in a cloak before ghosting away from his lair. He walked softly into the night, the tinkling of the bells in his hair the only signal of his passing.