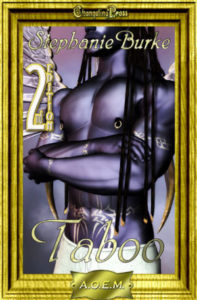 Excerpt
"I am so sorry, babe." Talcor sighed regretfully as he stared deeply into his would-be lover's golden eyes. "Maybe the timing just isn't right."

He lifted the richly colored silk sheets that lay loosely bunched around his lower body and peered at the unresponsive cock lying limply against his left thigh. It looked almost as tired as he felt, the purple head looking as if it wished to hide.

And today was to have been the day!

He'd had the perfect day planned, with the help of his chaperone, of course, and it would have culminated with the act that would have shown his mate-to-be without a doubt how much he loved and cherished their upcoming bonding.

Would have being the operative words, of course, but still, it had been a damned near perfect day.

He and his mate-to-be started out with a romantic walk along the lake that bordered both of their parents' properties, joining the land in the same way they hoped both their powerful and influential families would be bound. The sun had been shining, the breeze warm and gentle, the look in his soon-to-be lover's eyes eager and anxious.

And of course those eyes would be filled with hunger and need. They had been betrothed since infancy. When puberty hit, along with the explosion of sexual hormones in his body and the growth of his wings that signaled sexual maturity, he had fantasized about the act, and seeing the light of love and complete and total satisfaction shining from his mate's face.

Creators, he fantasized about the sounds that would pour from those precious, full lips, the gasps and moans, the way that sleek form would twist under his, the way they both would take flight as their wings hefted them into midair as the burn to come became unbearable…

But for some reason he always had been -- hesitant was as good a word as any -- to shake off his chaperone for a little afternoon slap and tickle with his would-be-lover.

It was disrespectful, he told himself, no matter how his hormones had raged at him and his wings' fluttering told the story of sexual frustration so great he thought his balls would explode. He had wanted to show his mate's worth by showing the utmost respect and prove he was worthy of the match by not doing anything to put a black mark on his mate-to-be's name or reputation.

But had anyone besides him appreciated the fact he was denying himself out of respect and honor for the traditions of old?

Both their families had done everything in their collective powers to get them to break the no-sex ban, shy of stripping them both naked, covering them in aphrodisiac gel, and locking them both in the same room with a mirror, a comfortable bed, and a gallon of restorative drink.

They all, including his own parental quad, seemed to be upset that he was not trying to actively seduce the leggings off of his chosen!

And both their families' motives became even more clear when the agreed upon chaperone began disappearing during the couple's frequent dates and midnight strolls.

Every time he ventured forth, romance on his mind and love in his heart, his chaperone would almost magically disappear, only to suddenly pop up from behind a tree or a bush, the expectant look on his face turning into a deep frown when Talcor was not caught with his hands down his chosen's leggings, humping at those beautiful legs and rounded ass like a canine in heat.

"No passion marks, bruises, or fingerprints today?" Mave, their chaperone, would grumble, much to Talcor's embarrassment.

Then the man would sadly shake his head when all proved to be as it appeared, prim, proper, and above all, respectful.

And after he returned to his homestead, there were the disappointed looks and upset murmurs when it was reported that his chosen had remained disgustingly un-debauched.

"No finger marks, suck marks, teeth tracks, or spilled semen," Mave would report to both sides, and then the weeping and wailing would start, followed by those helpful pamphlets that would mysteriously appear in his sleeping chamber.

He kept an annotated file of them. Thus far, his favorites were, "How to Debauch a Virgin in Ten Easy Steps," "You Don't Have to Be Afraid to Get Your Cock Wet," "Dip into Desire: A Practical Guide for the Shy Virgin," "Fucking is Fun and Easy," "Tossing Salads and Other Practical Uses for the Tongue," and "Ten Fun Things to Do With Your Cock."

But now, finally, after all those years of doing the right thing, of being proper and respectful, of being a gentle-Fae, he decided to reward his own patience by screwing the living daylights out of his mate-to-be.

Only it hadn't gone exactly the way he'd planned it.

He had fantasized about this for so many years, planned each moment from their surprise escape from Mave to the romantic walk along the beach, to the messy, finger-sucking meal he'd specially ordered to be served in this very suite.

And what a suite it turned out to be.

The orgy-sized bed was second only to the orgy-sized tub! The fireplace was unnecessary in the warm climate of their island, but it was a romantic, soothing addition nevertheless. The warm colors that filled the room were designed to give a feeling of comfort, the candles placed to deliver a sensual atmosphere and soothe worried virgins. All in all it was a perfect place for a seduction, the perfect place to plow a trail so deep in his mate that the mere mention of his name would send lust, hunger, and desire flowering and blooming, making the longing for his touch all the sweeter.

Only now… dammit… his garden stake refused to rise to the occasion! So now he was trying to reason with a limp pecker, and his chosen had a speculative look in those amber-kissed golden eyes.

"Talcor," his mate-to-be purred, the velvety, honey voice sending shivers down his spine, but no telltale signals to his balls and cock. "Love? Have you ever thought that you… um… might be kind of… well… What's the right word I'm searching for here? Straight?"