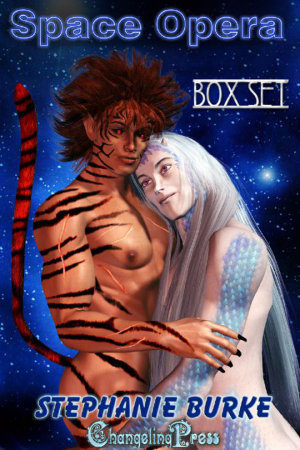 They were the new world's only hope. Now their only hope is running from the very people they were created to protect.

Javen and Gara were bred to be the perfect soldiers, protecting New Earth from the scourge from above. As lovers, they were created to resonate in perfect harmony with each other, their lives the stuff of legends. But they proved to be evolution's darlings, developing beyond anything the scientists had ever dreamed of, their advancement eclipsing that of their creators.

Now their only hope is a planet of their own, where they can live free -- free to construct a new society based on the ideals of justice and honor.

But with dangerous factions at work, a mysterious prophesy, and an old enemy amassing, this stunning melody may ring out with the perfect notes to save the worthy and unworthy alike. Freedom demands an awful price.

Excerpt
"Bonded, let down my braid?" The silver-haired man asked the question politely as he gracefully dropped to his knees beside his beloved.

Javen looked up at his tora through silver lashes, his purple eyes gleaming in anticipation as he licked full, pouty lips. His lithe body was covered in an odd type of silk wrap, the weave plainly visible, but the material soft as air. Several colorful strands of blue and purple, strands of hair from fallen comrades, made up a pattern in the cloth. His long, pale fingers rested on his slim thighs, his poise perfect as he awaited the response.

"Shall I unbind you, my mate?" The question was asked in a low, gravelly voice, the desire and intent clear. Gara the Red, High Lord Chancellor of this particular space station far above New Earth Sphere, observed his mate, his cock swelling, his blood running hot. "Shall I release you to take what pleasures I can off that pale body of yours?"

Javen seemed to shiver, though his body remained perfectly still. He inhaled deeply, breathing in the scent of his bonded, trilling a soft, vibrating song of desire as he felt his own erection grow. "Unbind me, bonded, if you dare… if you have a need of the pleasures this pale flesh can bring you."

Javen tilted his head to the side, shifted his shoulders, and allowed his robe to slide from one shoulder, exposing a chest decorated with what appeared to be elaborate, pale purple tattoos.

Javen's scales were beautiful, strong, soft and iridescent against his pale skin. They outlined his hairline at his forehead, trailed down along his neck to the backs of each arm. They overran the backs of his hands, giving him the look of an exotic jeweled statue. They continued around his chest, across his lower abdomen, and down his outer thighs.

Naked, he was a thing of grace and style, of beauty that no human being could dare possess. But… he was not human. He wiggled his talon-tipped toes in excitement, his eyes burning with desire.

"Oh, I have a need," Gara chuckled, reaching down and cupping his cock, running the flat of his hand along its hardness. Javen could almost feel the heat wafting off his beloved's body, and thrummed louder.

Gara threw back his head and moaned, his own touch stoking his desires higher as he observed the signs of need in his usually reserved mate. Javen was one of the most polite, perfectly poised ryuujin who had ever been created. To see him react so wildly to his own heat cycle… Magnificent.

Gara ripped his tunic from his body, ruffling his wild mane of red hair and exposing his broad, scarred chest in the process, tossing the shreds of material aside.

"Come," he purred, reaching out with both hands, tangling his fingers in his mate's hair. "Come ease my need."

He gripped the bands of ribbons that liberally twined through his mate's braid, a braid he himself had placed in Javen's hair earlier that morning. Javen tossed his head back, his trill growing deeper in his throat as he exposed his neck, his most vulnerable point, to his beloved.

Gara wasted no time in bending over and running his clawed fingers over Javen's neck, caressing the soft, firm skin and the raised scales that he so loved to touch, to lick, to nibble and suck.

Javen nestled into his mate's palm, his trill softening as Gara's hands -- his strong, scarred hands -- pushed the robe from his body, allowing it to fall around his waist.

"Do you have any idea how hard you make me?" Gara growled. He moved closer, closing his eyes and pulling in the spicy scent of his mate's neck, the heat of his desire so at odds with his cool skin.

"I can --" Javen reached up, pressing his hands to the heat between his bonded's thighs, feeling the rigid column of flesh that throbbed at his caress. "-- feel." His other hand joined the first, tugging at the tie at the waist, wanting the material gone that separated him from what he wanted.

He lifted his head again, leaning forward to nuzzle into his bonded's groin, bathing the head of his mate's cock with his cool breath. Throwing back his head, Gara purred and gripped his beloved's head, pushing him deeper against his crotch.

"That is what you want?" Gara demanded.

"Yes," Javen snarled, his eyes near glowing as he rose up to his full height, towering over his lover by more than a few inches.

"Then come and take it."