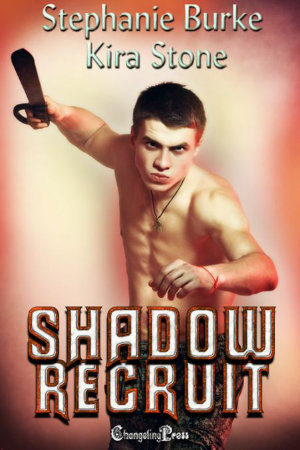 Greg's last memory before waking is laying in a muddy ditch as bombs exploded all around him. Now he can only assume he's been captured by an enemy, unable to escape. That is until he meets a feline shifter, and Greg begins to believe that this place is no dream but a new reality.

Oganji has been with the Shadow Warriors long enough to know that he needs a mate to sustain not only his humanity but also his life. Not just a warm body, but someone he could love, respect and share his life with -- and get the same in return.

Greg and Oganji make an unlikely pairing. Can they find a spark of love in each other before time runs out?

Excerpt
Greg's head jerked up, awareness zinging through his body as the flapping sound caught his attention. He quickly rose to his knees, his body taking on a ready stance, crouched low, his muscles prepared to spring into action, as he scanned the room. His sudden alertness reported that nothing had changed in his situation but for that strange sound. It sounded like... something airborne though not any model of plane he knew.

There was more light now so he must have fallen asleep during his vigil, and morning had come around again. He scanned the room, left to right, moving as little as possible until he could pinpoint the sound.

Instinctively, he looked up.

Fuck. Greg froze as his brain sent his body a hundred different simultaneous commands, all of which amounted to "Get the fuck out of the way!"

There was a huge fucking bird hovering above the brazier, the sound he heard emanating from its huge feathers as it flapped its wings lightly.

Whatever it was, it had an enormous wingspan, taking up over half the diameter of the room, and possessed a beak that looked like it could crush heavy gauge steel. Its feathers were an array of color in shades of yellow, gold and orange, unlike any other avian creature Greg had ever seen. It came to roost on the far side of the room, furling its wings against its enormous, feathered body. With a shiver to settle them all in place, it turned its head to stare at him.

As Greg looked on, the enormous bird tilted its head to the side, its deep red eyes the color of hot embers boring into him as though it could see into his soul, before it extended its wings open to their full extent. It looked like... like lungs or a bellows breathing as it slowly opened its wings and closed them again, repeating the deliberate maneuver. The resulting wind blew Greg against the stone wall, pinning him there.

As Greg watched, his heart pounding in fear, adrenaline coursing through his body, the avian unfurled them once more and, in a blinding white flash of light, disappeared.

When Greg blinked away enough of the dancing white and red spots in his eyes to see properly again, he discovered that a very tall, very naked man had taken the bird's place.

Greg gripped his sanity firmly with both hands and tried to separate what he was seeing from a sterling example taken out of the fantasy novels he loved. He was not going to take a mental dive. Maybe they were using drugs, gasses or mind control... There had to be some explanation for this craziness.

As he crouched there, trying to hold his shit together, his silent visitor shook himself, a full-body shudder, and proceeded to ignore him. He walked over to the dying embers in the fire pit and added a pinch of something -- damned if Greg could figure out where he'd gotten it from -- to the glowing coals. Flame shot up in brilliant orange and white tongues of fire that did their best to lick the chamber's ceiling. As the fire finally settled into an erotic belly dance, flicking and swirling, more smoke spread through the nearby air in an ashy gray cloud. It smelled cloyingly sweet, almost familiar, tempting him to breathe deeper, but Greg couldn't put a name to the scent. As he reluctantly gave in to the need for oxygen and inhaled, the smoke began to make his head swim and his vision hazy.

Greg knew his only weapons were his body and his mind, his instinct, so he tightened his muscles and tried to shake off the lethargy. He needed answers. "Who are you? Why are you keeping me here? What do you want from me?" And how can you possibly be real when no human technology could duplicate what you've done?

The man cocked his head to the side very similar to an avian way, staring at him so intently that shivers ran up Greg's spine, but he said nothing.

In human form, the odd stranger had an unearthly beauty some primal part of Greg acknowledged. His golden skin was warmed by the light of the fire, and his shoulders looked broad enough to carry the world yet still in proportion to the rest of him. Upper body strength would be a bitch to overcome in hand to hand, but if that is what it took... Then, with the curious habit his brain had of making odd associations, Greg realized his visitor looked very similar to that little golden statue famous actors politely attempted to shove their competition under a bus to receive on one of those fancy award shows.

Except this stranger's cock. Okay, he had to admit that the golden guy was fit to fuck. That same strange part of his brain that seemed to go off on tangents of its own realized that in a different time and place, he would be so down with bending him over and taking a ride on his dick. But the dick was never part of that golden statue in any of those fancy winner photos, although in Greg's opinion it damn well should have been, especially if it was done to the proportions of this guy. That impressive piece of equipment was worthy of tribute.