One of Seven (Legendary 1) 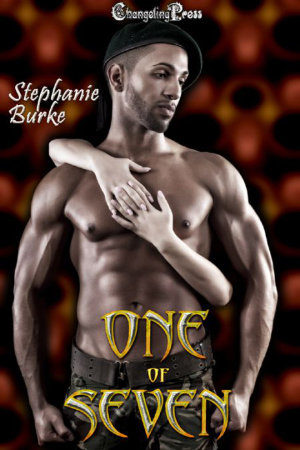 Electra. A deadly combination of beauty, stealth and strength. Her performance is always top notch, her leadership skills impeccable, and the camaraderie she shares with her men unheard of in a Merc Troup.

Others call her Lady Death.

Midas calls her his little chameleon. And he knows he will probably be responsible for her demise.

Excerpt
What a deadly combination of beauty, stealth and strength.

How she did the things she did was simply beyond his understanding. Her performance was always top notch, her leadership skills impeccable, and the camaraderie she shared with her men unheard of in a Merc Troup. He knew it would probably be responsible for her death.

"Electra." His voice was blank, devoid of emotion, surprisingly monotone, as was normal for him. "Mission complete."

"And I assume there were no witnesses?" It was a statement more than a question.

Electra stared at her lieutenant from beneath a fringe of dark, stick-straight hair. She expected no less than perfection from anyone in her company, herself included.

"Midas." Her voice was as crisp and cold as the look that leapt into her eyes. "There is no such thing as an acceptable loss. All human life is worth something." Her eyes trailed over his body, and she frowned slightly. "Even yours."

Midas said nothing, just calmly stared at his leader, accepting the condemnation she delivered in smooth tones that dripped with the anger she was barely holding back.

"So what do you have to say for yourself, Lieutenant? This was supposed to be a simple assignment, and somehow you come back and tell me there were acceptable losses? You know I never ask my people to do anything I would not and could not successfully do, and I would never consider any loss of life acceptable unless they were about to cut your fucking head off with a chainsaw." Her words were low and clipped. "I could have done this job in my sleep, Midas, and never would have garnered the notice of the most observant person on the streets. Make your excuses, and they had better be good ones."

"Mechanical losses." His reply was given in his dead, emotionless voice, and that was all he said, though he had to bite his cheek to hold in his amusement. Getting her worked up was so much fun. As much as he maintained his cover as an emotional desert, she fairly glowed with the feelings she rarely sought to hide. Once you got to know Electra, all her emotions showed clearly on her face.

Running her fingers through her hair, she sighed deeply as the tension drained from her body, still leaving her at alert, but toning down the battle-ready edge. Stand by, he thought as he watched her eyes open, their amber depths calming a little. She had easily enough dropped into standby mode.

"Report." Just like that. No apologies for her assumption, no regrets, no emotions -- just back to the business at hand.

And the man known only as Midas began to speak.

"Loss of one poorly placed surveillance camera -- it was found during an unscheduled sweep and was deactivated. The built in fail-safe was activated and the camera self-detonated causing the loss of one listening device. Target personnel acquired new transport after an unplanned mechanical incident... his car was rendered inoperable when his civilian vehicle failed due to faulty wiring not of our design. Losses dropped the efficiency of the mission by approximately three percent. Information was acquired through the usual means; fail-safes and extra precautions were not necessary. Mission completed with a ninety-seven percent proficiency, acceptable within mission parameters, yet unacceptable by my standards. Any disciplinary actions taken are understood and applicable, Commander."

And just like that he placed his own head on the chopping block, waiting for a chainsaw he knew may or may not drop.

As easy as it was to read Electra's emotions, it was that much more difficult to determine what her actions would be. "What punishment do you think is acceptable, Ice Man?"

"Any you feel necessary."

She eyed him for a moment before snorting in what appeared to be disbelief. She relaxed back in her chair, staring balefully at his face. "You did your job. If a few of your toys didn't behave, that is your problem. If the idiot you were following didn't maintain his personal vehicle that is none of our affair. You followed him, got the information we needed, and got out undetected. Don't look to me to castigate your troubled soul, Ice Man. I am not into flagellation. You want to be beaten for all the dark stains on your soul, get a dominatrix."

"Commander." Nodding, he turned with military precision and quit the room.

He paused at his commander's voice, not turning around but curious as to what the woman would say.

She was beautiful -- God, was she beautiful -- and she was one tough military commander, one of the best he had ever served under.

But he just needed her to yell, to scream, to punish him for something, for anything. That would make his guilt so much easier to take... especially for what he was about to do to her.

Instead he never looked back as he exited her office, his footsteps ringing on the diamond-plate metal floor. He walked out of the room, knowing the information he returned to her would lead to her leaving her protective nest and giving him the time he needed to activate a plan that had been in motion for years.