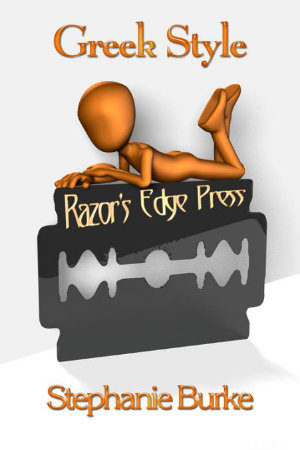 May didn't know she was breaking a taboo and stealing male energy. All she wanted to do was take pictures of poppies in the mountains of Greece.

But when a satyr and a faun demand she gives back what she has inadvertently taken, the term get your goat suddenly tales on a new and deliciously naughty meaning.

Excerpt
So much urine...

That was the only thought that went through May's mind as she recalled her trips to the children's petting zoo so long ago. There were pygmy goats going into heat, and there was urine everywhere.

So now, as she was tied to a tree watching a field full of goat-legged men dance and sing, she was both fascinated and horrified by the prospect of watching them mate.

Of course it wasn't her fault that she was tied to this particular tree. No one ever told her wandering around the mountains of Cephalonia on her vacation to Greece would end up like this. She only wanted to see poppy fields, for goodness' sake. No one had warned her about roving bands of fauns and satyrs and mating season.

She didn't mean to crash their party, so to speak. She had just been taking photos and marveling at the majesty of the island that was said to be the home of Odysseus when she stumbled upon them in their poppy field of lust.

She couldn't understand a word of what they were saying, but a bunch of goat-legged men carrying spears would be enough to grab and hold anyone's attention. She was so stunned by this discovery that she never noticed the two... well... bucks, maybe... walking up behind her until they had her roped and hog-tied like the prize attraction at a 4H show.

They began babbling at her and she began screaming at them.

That hadn't helped matters, she was now willing to admit, because that got her tied to the tree and gagged.

And now she sat there, watching them build up a barn fire -- burning poppies and what smelled suspiciously like marijuana -- and dancing around like they had no sense.

It was enough to make a woman cry... if she weren't so damn high.

But before she could further contemplate her pitiful state, she saw one of the shorter males clip up to her. He spoke softly to the huge guards, and they grunted something.

This one was one that she classified as a faun. He -- for his nakedness except for his fur left that abundantly clear -- was about her height of five feet four inches tall and looked to be a bit gentler than the ones she classified as satyrs. The major difference in her classification scheme was that the ones she considered fauns had smaller, branched horns like deer antlers and cute, elongated elf-like ears. The satyrs, on the other hand, had massive curled ram's horns on either side of their heads. Their ears hung low like goats' ears, and the dudes were massive. They all stood at least six feet four and were more heavily muscled than their faun counterparts.

In fact, it was the fauns who were dancing and having a blast while the satyrs looked on protectively with their big spears, big muscles and big... well, hung like a horse could have been rephrased as hung like a goat. But no one was pissing on anyone, so that was a good thing in her book.

The faun approaching her had a head full of long golden-brown curls which matched the mat of curls that covered his groin and legs. His cloven hooves were almost dainty when compared to the soup plates the satyrs clomped around on. His eyes were a gentle brown, and he offered her a tentative smile.