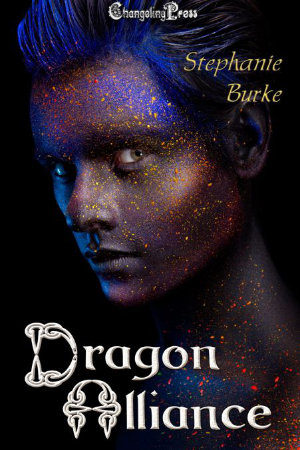 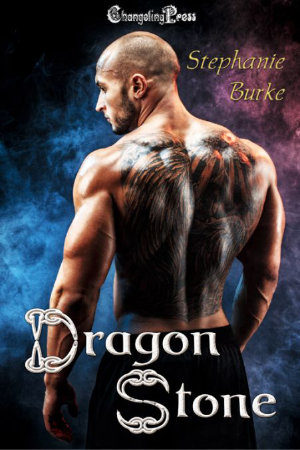 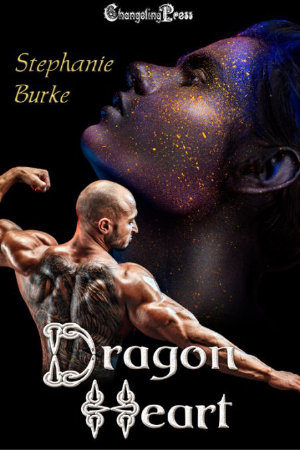 Excerpt
“So, this is nice.” In his human skin, Vulwin, aka Win Arcarius, was an unmistakable albino black man with long, pale blond hair and bi-colored eyes that were to die for -- or at least that was what his agent believed. He looked around his new quarters and gave them an approving smile.

He was tall, sleekly muscled with large eyes, one green eye and one silver, that peered out at audiences from a set of lashes so long they looked like they had to be fake. His cheekbones were high, his lips were full, his skin was an extremely pale tan, and his attitude, like his clothing, was fierce.

Beside him walked his proud mate, his dragon, who was wearing a tight, white tank top, a pair of tight denim jeans, and the most kick-ass pair of black riding boots that the world had ever seen. Probably because they were Dhrow-made and designed with his protection in mind.

In comparison, Win looked ready for the runway in his long, flowing red tunic and loose black pants. He was wearing black leather sandals on his feet and was resplendent in his gold jewelry… huge bangles on his wrists, several delicate chains in his ears, and rings on every finger and toe. He was a model in every sense of the word, and walking into this upscale tattoo shop and piercing parlor was guaranteed to bring traffic to a halt.

Strutting before them was a tiny black cat, Chinsie, who looked more of the human kind of pet than anything she looked like Under the Hill. Around her neck was a spiked collar of gold, and she moved with the same protective attitude she had presented before. She was a bad-ass and she knew it.

Once inside the small brownstone mansion, Chinsie took off like a shot to a bay window covered in plush silence pillows, obviously her spot in the shop front room, and perched herself like royalty.

“I thought you said you’d be gone for a month, bossman,” the short woman behind a tall glass counter said as she put down a sketch pad, looked up, and --”Well I’ll be damned.” Her mouth dropped open when Iffear reached out and grabbed Win’s hand.

“Plans change,” he offered, his voice deep and gravelly and still enough to put a shiver in Win’s loins. Was there ever a case of a creature passing on being in heat to another creature of a different species? He still didn’t know, but damn, he was feeling like he was in rut around his mate. “This is --”

“Win Arcarius,” the woman managed, eyes growing wide in shock. “Supermodel and spokesman for about a bazillion products. I’m sure you know you’re beautiful, but do you know how beautiful you are?” While she spoke, she not so secretly pulled her phone off the counter and began taking shots of them.

The smile that spread across Win’s lips was genuine as he pulled Iffear in closer. “Thank you.” His voice was accented in a way that most humans could not place, though the companies he represented loved it. “It’s nice of you to say so.”

At their close contact, the woman’s smile became a smirk. “Vacation, boss? Going to Europe for a month or so? So is that what the kids are calling it these days?”

“Mai,” Iffear groaned and Win smirked back at her. “What happened is none of your business.”

“Mai Wind,” she introduced herself, her purple-tipped afro adding height to her short stature. “Resident piercer and apprentice tattooist. And you better like my style. I’m wearing your name on my ass.” She hopped off her high stool and walked around to meet them, spinning around at the last minute to show the stylized WA on the back pocket of her pants. She turned to face them, holding out her hand as she drew closer. “And dare I pray you want to get your tongue pierced today? A nipple?” She pointed to his crotch. “Something in the lower region, perhaps?”

“Ohh, kinky.” Mai chuckled before looking up at Iffear. “I hope he’s pulled you from your life of celibacy and popped your second virginity so you can stop being such a raging bitch.”

Win’s laughter was loud and obnoxious and he didn’t care. Talk about getting your roles reversed.

“Why do I like you?” Iffear snarked down at her, tapping her on the nose with his free hand. “And why haven’t I fired you yet?”

“Because I am the one who keeps your sorry ass organized. What would you do without me, boss?” She laughed, punching him lightly on the arm. “Like the time those drunk twin sorority girls --”

“So,” he spoke loudly over her, “This is my shop manager and main piercer, Mai Wind. She’s snarky.”

“And Mai, this is Win Arcarius, my husband.”