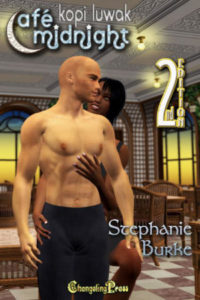 When Missi orders something hot and exotic, she never expects to get the strangest and most exotic -- not to mention expensive -- cup of coffee in the world.

The smooth, rich blend is enough to bring Missi to her knees, but the too beautiful for words Portuguese-speaking server Nicolau is enough to make her heart stop. Now she's leaving Café Midnight with a well-hung Royal Civet Shifter going into heat... with Missi squarely in his sights. Is she brave enough to accept all that owning this powerful cat/man entails?

Excerpt
"Your coffee." The man's voice rasped like silk and velvet rubbing together, smooth in that rough sort of way. His almond-shaped eyes were a brown so dark they appeared to be black even at the brightly lit table. His lips were full and plump, perfect for chewing or sucking... or having them chew and suck on choice areas of her anatomy. His nose held just enough narrowness to hint at an Asian heritage, while his cheekbones told her he would age gracefully.

His skin was gold. There were no other words to describe the combination of deep reds, golds and yellows that made up his skin tone. It was tight, taut, and healthy looking, spread out over a broad, muscular frame that looked to stand only inches above her own five foot seven. He was not the tallest man she'd ever found attractive, nor was he the shortest. He was... What was that story, Goldilocks and the Three Bears? Yeah, just like the middle bear, he was just right.

And he was bald.

That was a new one for her, big time. She was used to seeing the bald domes of guys like Vin Diesel and LL Cool J, and even Dwayne Johnson, on television and thinking that they were sexy. But in reality, she had never met a bald guy and thought she wanted to jump his bones, until now.

"You ordered something dark with a little cream?" His voice seemed to drop a few octaves as he smiled wickedly at her.

Raising her hand to her chin to check for drool, Missi nodded dumbly.

"Then this is for you. Dark, rich, smooth, creamy with just a hint of spice and sweetness."

Again, she nodded, knowing her eyes were growing wider with every word he spoke. But she couldn't open her mouth or stupid would fall out and embarrass her to the point that she would have to go crawling out of the shop in her good date clothes.

Leaning closer, he placed the gold and red cup, complete with its star-shaped saucer, in front of her.

Automatically, her gaze traveled down to the dark brew. She softly inhaled its fragrance and nearly moaned as the rich combination of scents teased her senses.

"You like that?" He sounded amused but almost giddy in a way. "You know, this blend is not for the meek."

"I -- I --" She stammered for a moment before patting herself on the chest and looking up into those almost black eyes. "I think I'm up for it."

"And I thought that was my line." He chuckled, and Missi bit back a squeal of delight. We have achieved flirting! her mind was screaming, instead of trying to convince her heart to stop beating so fast or it would explode.

"It's a rich combination of exotic spices from Portugal, Indonesia, New Guinea, Australia, and Malaysia. There is a special... technique used to give this coffee its extra smooth taste. You like smooth?" He took a seat across from her on a low stool that she had completely missed earlier.

"Smooth?" Her brain finally kicked her vocal cords into action. "Like a hot comb on nappy hair?"

Her eyes widened as her Southern roots slipped out of control and fell to the table between them. She looked up at him in horror, but he only tilted his head to the side before snickering loudly.

"What an image," he allowed, before urging her to take a sip.

She took the graceful out he'd provided and picked up her cup. First she leaned forward and inhaled the aroma. It smelled like spicy heaven. Closing her eyes, she lifted the cup to her lips and took her first taste.

Flavor exploded across her tongue. She didn't know what she tasted exactly, but she realized that she loved it and wanted more.

The taste combinations danced along her senses, starting with a powerful kick of smooth spice, followed by the cream, easing the potency and adding to the texture, and finally, the sweetness brought up the rear, opening her palate and making her crave another sip.

This was some damn good coffee -- almost worth the fifty-dollar price tag. Moaning in pure epicurean delight, she slowly opened her eyes to stare at the man who had brought her such a treasure.

"Kopi Luwak." He nodded toward the cup. "Try more."

It was a reasonable and quite desirable request, so she complied. She sipped and she moaned and she orgasmed until she tried to take more and realized the coffee was gone.

The magic just died, she thought before looking up, wondering if the hottie who had delivered it was long gone, like her Kopi Luwak coffee.

"Want another?" he asked, leaning forward as if he was inhaling her scent.

"I can't afford it." Her disappointment was not feigned. "That was the best cup of coffee I've ever had."

"Connoisseurs agree with you." His voice dripped hot sex. It was a wonderful selling tactic, one that would never fail...